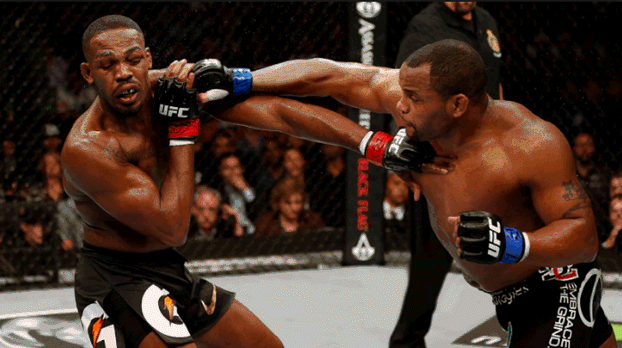 If there was one word to describe Daniel Cormier, it would be ‘unappreciated’. That’s a bold thing to say for a man who is the reigning Light heavyweight champion of the world and is the third best (UFC Rankings) pound for pound fighter in the world, but it certainly is true in case of this man.

Popularly known as DC, Cormier has received little love from fans throughout his run in the UFC. He is most notably derided for apparently being a ‘boring’ fighter, a distinction this writer doesn’t agree with. The man who won multiple national wrestling titles (in the US), went to the Olympics twice, won a medal at World Championships, and to cap it all off, won a UFC championship, not only deserves everyone’s respect, he demands it.

Things haven’t come easy to Daniel Cormier, ever. Rather than admitting defeat and rolling over, DC ‘Embraced the Grind’. This is what makes him the champion he is today – a champion in MMA and a champion in life.

Cormier’s life has had a lot of tragedy and shortcomings. He didn’t have the best of childhoods. His close friend and training partner, UFC Middleweight contender Luke Rockhold had the following to say:

“DC definitely had a rough upbringing and saw things go wrong in his life. But he also has been a competitor his whole life. And it has created in him an unbelievable will to win.”

At age seven, his father was shot and killed on Thanksgiving Day by the father of his second wife. Much later in life, he lost his infant daughter in a car crash. Although his professional shortcomings pale in comparison to these real-life tragedies, they are more than most men can endure in a lifetime.

Daniel Cormier is one of the most accomplished American amateur wrestlers ever, yet he never won the NCAA Division I title, he finished fourth at the 2004 Olympics, and couldn’t compete in 2008 at all due to kidney failure caused by a bad weight cut. Not that he wasn’t good; he was one of the best. He just had the bad luck of competing in the same era as Cael Sanderson, arguably the greatest American amateur wrestler of all time.

Hardships have always been a part of DC’s life. Just like his infant daughter, his cousin and a high school football teammate died in car crashes. His best friend was on an Oklahoma State basketball team plane that crashed in 2001, taking 10 lives. Perhaps it was fitting that DC took a huge right hand from Anthony Johnson right on the chin minutes into their first fight and went crashing to the mat; he had been knocked down before – not in a fight – and he knew how to get back up. This was almost easy for the man who once didn’t have a dime to his name and had a woman and a son to take care of:

We were on welfare. We called my parents, and they don’t have much. But my mom, my dad, my brothers and my sister—they pulled together whatever they had and they had $575, and they sent it to Salina and I. And it allowed us to actually get through the month until my next sponsorship check from Cage Fighter came. … It’s great to give this championship to my parents and my fiancée because now, we’re fine.”

Sometimes it drives me crazy that people don’t cheer for this guy. He is not just a champion in the UFC, he is an inspiration. But, I digress.

Going through a tough childhood, DC found and fell in love with wrestling. He also played American Football in high school and would have received a scholarship to Louisiana State University, if it wasn’t for his poor grades. Cormier instead turned to the sport he loved most – wrestling.

“The best thing about wrestling is that you are responsible for yourself,” Cormier said. “I didn’t have to worry about 10 other guys. If I got my a** kicked, it was because I didn’t train hard enough. It was that simple.”

Cormier left college without a wrestling title, but with All-American honors and was a prospect for the 2004 Olympics. It was during this time that hard times hit him. His three-and-a-half months old daughter, Kaedyn Imri Cormier, lost her life in an accident.

“You never think that you would have to deal with something like that,” Cormier said. “It’s the most painful thing ever. And you know what my biggest worry was after my daughter passed? How am I supposed to put a headstone on her grave when I have no money?”

Why do people not cheer for this guy again?

Despite all his personal plight, Cormier continued to wrestle, with the sole hope of winning the gold in 2004 in Athens. That wasn’t to happen. He finished fourth. DC had underachieved, again. He again spent the next four years training for the Olympics, but this time he couldn’t compete at all. Imagine making weight for years and failing when it mattered most. I can’t.

After missing out on Olympic glory for the second time in a row, DC had now realized his Olympic dream was over.

“I had thrown it all away,” he said. “My career was over. I had to accept that I was never going to be an Olympic champ, something that I had dreamed about since I was a little kid. But I knew had to believe in myself again and find people who believed in me.”

With probably little else to do, DC turned his eyes towards a young sport known as MMA. And it all started when he walked into AKA (American Kickboxing Academy) and got into a fierce scrap with none other than Luke Rockhold.

“DC came into the gym kind of cocky and all loud, and you don’t do that at a place like this,” Rockhold said. “So I gave it back to him and said, ‘OK, I want that (expletive) guy.’”

“We just went back and forth,” Rockhold recalled. “I hit him with a couple of shots. He got frustrated. We both put our heads down and were wailing away at each other until our arms dropped from
exhaustion. That was when we all realized that DC has that fight in him. It’s something that can’t be taught. You either have it or you don’t.”

It was during this time that he met another guy that he’d become close friends with.

“You have to be OK with getting hit in the face, and you don’t discover what you’re made of until you start exchanging punches and that happens,” said Cain Velasquez. “With DC, he gets hit and the light turns on. He sees red. And he just kept getting better and better.”

After years upon years of hard training with these guys under the tutelage of Javier Mendez, Cormier developed the necessary striking and grappling skills to go along with his world class wrestling abilities. Soon after joining AKA, Daniel Cormier debuted in MMA at Heavyweight and went on a romp. Despite his lack of height and reach compared to other Heavyweight fighters, DC beat everybody, including stunning upset victories over Antonio Silva and Josh Barnett, en route to winning the Strikeforce Heavyweight Grand Prix. The UFC had seen enough and they made the call they should have made a year ago.

Upon entering the UFC, DC quickly dispatched veterans Frank Mir and Roy Nelson. Never the one to be complacent, DC wanted to reach the mountain top and as the saying goes, ‘to be the man, you have to beat the man’. And ‘The Man’ at Heavyweight was none other than his friend Cain Velasquez. This, he didn’t want to do; not that he couldn’t, he just didn’t want to. Loyalty is a virtue of the brave. He did the next most logical thing – move down to the Light Heavyweight division.

“I don’t want to fight Cain Velasquez,” Cormier said. “He’s helped me so much to become a mixed martial artist. When I started, the dude opened himself up to me and showed me so much. He didn’t have to do that for me. (Fighting each other is) something we will all sit down and discuss as a team, as a management company, as coaches and try to figure something out.

As I’ve said time and time again, if Cain is champion, in my heart of hearts, I know I don’t want to fight that guy. Then I will go fight Jon Jones. I will fight Jon Jones if I have to.”

And fight Jones he did. Again, bad luck would have Cormier go down to a division where the greatest of all time was in his prime. This was not a past-his-prime, old, underweight Anderson Silva. This was Jon Jones, in all his championship glory and Cormier subsequently suffered the first defeat of his MMA career. But Cormier had lost before and he knew how to collect the broken parts and put them back together. When the short-notice championship opportunity came a few months later, DC was ready. DC was always ready, but this time the stars aligned and 12 minutes into the fight, DC found himself on the back of Anthony Johnson, almost sniffing the championship glory that had eluded him for years. Finally, Johnson’s palm hit the mat, and the kid from Lafayette, Louisiana had fulfilled his destiny. Daniel Cormier was the Champion of the World.

DC must fight that man again this Saturday and the most feared striker in the UFC doesn’t inspire fear in Cormier:

You’ll never see me do that. I’m going to find the correct side if I’m going to get a takedown. I’m not scared of him, man. I think that’s part of it: Part of it is just not being afraid. So, no. To answer your question (whether there’s anything scary about Johnson), not at all. Not one bit. I know that if this guy fought Cain Velasquez, I don’t even know if he’d last a round. And I fight Cain Velasquez almost every day.”

There is no doubt in my mind that this is exactly how DC feels. DC is prepared for his second title defence, and I hope the fans show him the respect that he deserves – win, lose or draw.

Regardless of the outcome of this fight, Daniel Cormier has etched himself a place in the annals of combat sports. He has faced tough times and came out stronger than he went in. Famous pro wrestler Scott Hall once said the following:

And Daniel Cormier is a bad, bad man. You better believe it.

Previous articleGastelum gets ‘weeded’ out of fight with Anderson Silva
Next articleDaniel Cormier: Someone gonna get hurt real bad