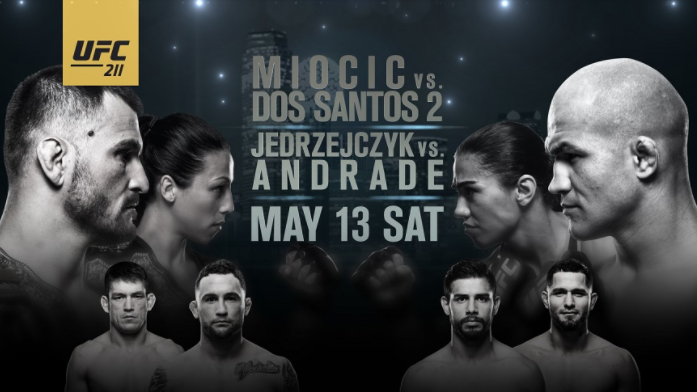 UFC 211 is right around the corner with a very deep card with a lot of meaningful fights. The card might not be the highest seller, but seems poised to become the best fight card of the year so far. Every fight on the main-card has some pulling power. I for one can’t wait to tune into this event.

As always, we will try to come up with predictions for the main-card fights, but take these predictions with a grain of salt. In a sport as unpredictable as fighting, predictions fall flat as often as the fighters themselves. That being said, let’s take an individual look at the fights, starting with the two title fights.

Stipe Miocic 16-2) vs. Junior dos Santos (18-4)
In a rematch of their 2014 fight, these two heavyweights will face each other again. This time however, the stakes are high as the heavyweight title is on the line. Their first fight was spectacular and these two are expected to steal the show again.

Stipe Miocic is very different from the fighter that faced JDS in 2014. Since losing that fight in a decision, Miocic has been destroying everybody in his path and has since won four straight. He looks way more confident in his fights now and his boxing is better than ever. He out-struck Alistair Overeem, who is arguably the greatest heavyweight striker in the UFC.

The same cannot be said for JDS though. Since defeating Miocic, JDS has only fought twice – winning one and getting knocked out in the other. Granted he looked amazing against Ben Rothwell, Rothwell is nowhere near the boxer that Stipe is.

Even in the first fight, Miocic essentially out-struck JDS in the first two rounds before eating a huge left in the third and subsequently gassing in the later rounds. We, however, do not know if his cardio has improved or not as he has not really been taken to deep waters since that fight.

Miocic is a wrestler-boxer and uses his wrestling with his boxing well. He is a very well rounded fighter and he exhibited this by escaping Overeem’s guillotine choke in his last fight. JDS is primarily a boxer but has excellent takedown defence. This is what makes this fight most interesting. Even in the first fight, Dos Santos stuffed all of Miocic’s takedowns but one. We are, again, essentially looking at a boxing fight here and Stipe is more than capable of hanging with ‘Cigano’.

The Prediction: JDS will probably again look to drag Miocic deep into the later rounds and pick him apart with his boxing. Stipe has been the aggressor in his previous fights and he might not employ the same strategy here. JDS has the one of the best takedown defences in the business, so Miocic’s wrestling might be all but useless here. The longer this fight goes, the more it will favour Dos Santos. However, I see it ending early with a KO win for Stipe Miocic.

The Pick: Stipe Miocic by KO.

Jessica Andrade has looked phenomenal since moving down to strawweight. She has won three in a row and is the clear number one contender in a division that is not very deep at the moment. Andrade has tremendous size advantage at strawweight and she hits like a truck. She is an aggressive fighter and likes to pressure her opponents. If her last fight is any indication, the weight cut does not seem to have any effect on her durability. She is a dangerous puncher and her size advantage makes her a wrestling threat as well.

Joanna Jedrzejczyk is easily the best pound for pound female fighter on the planet. She might also be the best striker in women’s MMA. A multiple time Muay Thai world champion, Jedrzejczyk is an excellent kickboxer and has ridiculously out-struck her opponents in her last few fights. As technical as she is though, she does not have fight changing power in her hands. She is more of a volume puncher who likes to pressure her opponents and swarm them with strikes until they fold. Also, she is known to get hurt in her fights.  Jedrzejczyk dominated Karolina Kowalkiewicz in her last title defence, but she was hurt by one right hand from Kowalkiewicz. Andrade hits much harder than Karolina and if she catches the champ clean, the fight could be over.  Jedrzejczyk hold a clear advantage in the clinch, but Andrade’s physical strength may prevent Jedrzejczyk from keeping her against the fence. All in all, this is a very interesting match-up and the result is not a foregone conclusion like many believe, not by a long shot.

The Prediction: I expect more of the same from the champ: pressure the opponent until they crumble. Andrade has never gone five rounds in her career and that could be an issue. While Andrade can win at any moment with one punch, I don’t see that happening.

The Pick: Joanna Jedrzejczyk by decision.

This fight makes no sense. Demian Maia has earned his shot at the title and he should not even have to fight Jorge Masvidal. Looking at what happened to Ronaldo ‘Jacare’ Souza very recently, this fight could prove catastrophic to Maia. Having said that, this is the fight that I am most looking forward too. This is a classic match-up of a striker vs a grappler, except Maia is not your average grappler, he is the best ever.

Masvidal seems like an altogether new fighter now after knocking out Donald Cerrone. He had been criticized for year for not ‘pulling the trigger’. He shut the mouths of those critics with his performance against Donald Cerrone. He is a dangerous striker and has excellent takedown defence. He likes to set his strikes up with his jab and also likes to go to the body. He always looks excellent when he is pressuring his opponents but he tends to stay out and score points. If that happens, Demian Maia is the most dangerous opponent in the world for him.

Maia’s grappling prowess is well known. I’ll just say once more that is the greatest MMA grappler of all time and that’s that. What’s way more intriguing is the fact that he has been hit 13 times in his last four fights combined. That’s right. THIRTEEN. These four fights include fights with Matt Brown and Carlos Condit, who are ultra dangerous strikers. Maia has been consistently single-minded since moving down to welterweight. He looks to take his opponents down and strangle them and that is what he will look to do here.

The Prediction: While Masvidal has excellent takedown defence, I am not sure if he can stop Maia’s takedowns, who has dominated better wrestlers than Masvidal. Masvidal will need to relentlessly pressure Maia and stuff all his takedown if he needs to win here. However, I expect Maia to take Masvidal and tap him out.

The Pick: Demian Maia by submission.

Frankie Edgar (21-5-1) vs. Yair Rodriguez (10-1)
This is another interesting fight on the card. This fight pits a young, up and coming talent against a future Hall of Famer. This is definitely the biggest test of Yair Rodriguez’s career; he has never faced someone on the level of Frankie Edgar yet.

Rodriguez is a very crafty fighter and he is as entertaining as he is effective. He is one of the most creative kickers in the UFC, and there is no kick that he can’t throw. His boxing still needs some work but he is good there too. He looked phenomenal is his last fight against BJ Penn, but don’t let that performance fool you. Frankie Edgar is not BJ Penn.

Frankie Edgar is one of the best fighters of the modern era. He has done it all, from winning world championship to defending it, and he has had his eyes set on the featherweight title for a long time. A win here probably won’t get him that, but it will be a big win regardless.

They key to this fight seems to be range. Rodriguez is much taller than Edgar and this will help him maintain range. This range is exacerbated by his kicking game, which is unmatched. Edgar will have to close the distance to get success. He has the footwork to do so, and it will be interesting to watch how he deals with this reach disparity.

The Prediction: Edgar is old and does not have the quickness that he had in his younger years. He might find it hard to close the distance on Rodriguez. However, his wrestling and his top game are outstanding and I expect him to take Yair down in this fight. It is always a bad idea to count Edgar out and I’m certainly not going to do so here.

The Pick:  Frankie Edgar by decision.

After dominating his competition in World Series of Fighting, David Branch return to UFC with this middleweight fight against Krzysztof Jotko. This is a fight between two guys on a win-streak, with Branch having won 10 in a row and Jotko having won five. Jotko’s wins have, however, come in the UFC.

Jotko has improved considerably on the feet. He is, however, most effective on the ground. He has a methodical pace to his fights and wins most of his fights via decision.

Branch had been on a tear in WSOF before returning to the UFC. He has won ten in a row and is looking to make an impact in the already stacked middleweight division.

The Pick: David Brach by decision