UFC 211 Reactions: The Baddest Man On The Planet 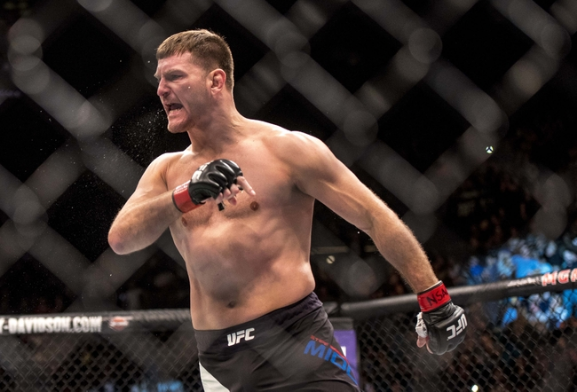 UFC’s PPV curse is over. Four and a half months into 2017, UFC has finally put on a show to remember. From stunning knockouts to utter domination, this card had it all. In the end, both the champions stood tall after masterful performances and Frankie ‘The Answer’ Edgar showed once again why he is one of the best to ever step foot inside the Octagon. Here are my thoughts on the show this morning…

Stipe Miocic is the baddest man on the planet

Baddest man on the planet has been a title that has historically been reserved for the heavyweight champion of the world. As good as Anthony Joshua (heavyweight boxing champion of the world) is, he does not stand a chance against the Ohio native in a real fight (sorry, boxing fans!). Stipe has now been the champion for exactly a year, and in the process has defeated three all time heavyweight greats. If there were any doubts regarding this man’s legitimacy as a champion, they are all but gone now. His performance against Junior Dos Santos should prove what we already knew: Stipe is here to stay.

Stipe came into this fight the winner of his last four, against a man who was the last person to beat him. While their first fight was an exciting affair that went to a decision, this one was over quickly. Maybe Stipe was bored and wanted to leave early. Maybe he wanted to revisit the store and buy a better slingshot. Maybe he had another phone call prank to play on his wife. Or maybe, just maybe, he wanted to send out a message to the entire world that he might be a goofy guy outside the cage, but when he steps in, he is a stone-faced killer.

He started the fight like he always does – putting pressure on his opponent. Dos Santos was initially doing a good job of defending and it looked like he hurt Stipe’s leg with some heavy leg kicks. Even with excruciating pain in his left shin, he continued to chase Junior and finally caught him with a right hand that shattered Cigano’s championship dreams. This was his fourth first round knockout in a row and he equaled UFC’s heavyweight championship title defence record.

Stipe told Joe Rogan after the fight that he’s the best in the world, but you already knew that.

Best female fighter on the planet

Joanna Jedrzejczyk – or Joanna Champion as she is lovingly called – has been called the best pound for pound female fighter on the planet and today she proved why that is as true as the fact that earth is round. She dispatched the number one contender with such ease that one might think the challenger was not worth. That, obviously, is not the case, the champ is just that good. She put on what was possibly the best striking display in recent memory as she picked Jessica Andrade Apart piece by piece. Joanna called her date with Jessica ‘beat a bit*h up day’ and she ended up doing exactly the same. The statistics should tell you all you need to know: Joanna landed 215 total strikes while taking just 74 in return!

Jedrzejczyk started the fight staying out of Jessica’s striking range, maintaining distance with leg-kicks. Jessica Andrade tried to close the distance by exploding in and throwing wild punches. That was essentially the whole fight in a nutshell. Jessica did catch Joanna with a couple of hard punches in the first round – causing a haematoma  on her forehead – but that was about the most damage she did. She continuously tried to burst in but Joanna hit her with excellent counter shots from all angles, never getting in trouble. Andrade did manage to take the champion down on a couple of occasions, but Jedrzejczyk got back up and never spent much time on the mat. While the champion took the challenger to school, Jessica Andrade did win many hearts by her incredible grit and determination, as she never gave up and continued to pressure the champion till the final bell.

It is arguable that Joanna  Jedrzejczyk is the best pure striker in MMA – man or woman. Her striking is like poetry in motion. It’s not clear who is the next challenger for her, but to her, it does not matter.

“There’s only one strawweight champion of the world and it’s me: Joanna Jedrzejczyk from Poland. Remember that. No one is taking this belt from me. No one. Nobody”

It’s always a bad idea to count out Frankie Edgar. That is exactly what a lot of people did after it was announced that he will fight Yair Rodriguez. He must have taken that personally because his performance was out of the world. He put an absolute beat-down on the youngster. I was almost tempted to write ‘beat-down’ in caps. It was that bad. It was as if Frankie was telling Rodriguez, and the rest of the world ‘Sheriff’s still  in town boy’.

Frankie took down Rodriguez early into the fight and delivered vicious ground and pound. Yair Rodriguez spend the majority of the round on his back taking a ferocious beating from Edgar and by the time the round was over, his left eye was an absolute mess. Round two was the same story more or less. Frankie took Yair down and after an initial scare of a heel-hook, it went real bad real fast for Rodriguez. ‘The Answer’ continued to maul  ‘El Pantera’ and by the time the round ended, his left eye was completely shut and the doctors deemed him unfit to continue.

Frankie Edgar answered all the skeptics in a beautifully violent fashion. While it is still unclear if he will fight for the featherweight title next, this performance certainly didn’t hurt his chances!

Demian Maia finally earned his welterweight title-shot after scoring a split-decision victory over Jorge ‘Gamebred’ Masvidal. The fight can be broken down into two separate fights: the stand-up part which Jorge was winning and the grappling where Maia was dominating. Maia spent almost the entire first round controlling Masvidal’s back but the round ended with some ground and pound for Masvidal. Jorge Masvidal had much more success in the second round with his strikes as he defended Maia’s takedowns and out-struck him on the feet. Maia did manage to take the fight to the ground, but Jorge’s defence was on point the entire time. Maia ended the fight on Jorge’s back with Jorge flattened out.

Maia dominated the grappling aspect of the fight but didn’t find a submission. Similarly, Jorge won the stand-up, but did not seriously hurt Maia at any point. The judges declared Maia the winner of a close, but correct decision.

Dana White confirmed after the fight that Maia is the next title challenger at welterweight. Demian Main has now earned what was rightfully his anyway. Maia vs Woodley is going to be fun!

David Branch made a successful comeback to the UFC by beating Krzysztof Jotko in a middleweight bout. This was a largely uneventful fight as both fighters were unwilling to take risks. Branch eventually took a split decision.

Eddie Alvarez and Dustin Poirier were putting up a fight for the ages before Alvarez delivered not one, but three illegal knees to Poirier’s head towards the end of the second round. The referee eventually declared the fight a no-contest but many believe it should have been a DQ win for Dustin Poirier. Regardless, the fight was awesome and needs to be booked again. Also, it’s imperative that all the sporting commissions implement the new rules of MMA. That, however, is a different topic for a different time.

Also on the card:

This was a spectacular show that was punctuated by not one, not two, but three amazing performances. Keep ’em coming, UFC!