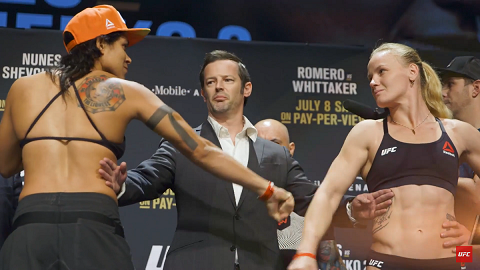 Both the welterweights have not been able to give consistent performances in their UFC run. Jordan has a complied a 3-3-0 record while Belal 2-2-0. Jordan Mein has delivered 10 KO/TKO’s in his entire career and has recently come back out of retirement making him a more aggressive and seeking opponent. Belal on the other hand has got majority of wins via decisions but has taken a lot of beating in his previous performances. Jordan would be looking to quickly finish the fight while Belal has all the skills to make it a rough night for Jordan with his takedowns. Both the fighters have equal chances of winning the fight.

Brian Camozzi’s UFC debut didn’t go quite well as he got TKO’d in his fight against Randy Brown and Chad Laprise who had won the TUF Nations title hasn’t fought for eleven months. The only statistics that stands out between these welterweights is the height-reach difference going in the favour of Brian. Both the fighters are in no situation to put on a lack lustre performance, what they need is to either finish the fight in a spectacular fashion or put on a performance of the night to get their names recognized.

The last time Travis Browne tasted victory was in January 2016 when he stopped Matt Mitrione via TKO. But since then he has become a shell of his former self by losing three fights in a row to top talents. The problem with Browne in his previous performances have been related to him not fully capitalizing on this skill set. Surprisingly his losses have been his association with GFC coach Edmond and many blame Edmond for his deficient performance. Alexey who is a veteran of the sport has all the skills to stop Browne regardless where the fight goes. He is known for his heavy hands where he stopped Jared Roshalt, Neil Grove and submitted numerous opponents including Mirko CroCop, Anthony Hamilton and Jeff Monsoon. If Travis Browne can’t finish Alexey in the earlier rounds, it could end up in the hands of the judges or in the arms of Boa Constrictor.

The once lightweight champion is now a fighter struggling to make a mark in his newly found weight division. It’s no doubt Pettis has got all the skills, but his inability to somehow making the full use of them has led to a constant decline in his performance. Miller who has rebounded from his sinking career won three fights in a row until it was snapped by Dustin Poirier earlier this year. Jim Miller brings in excellent wrestling game into the fight and if he can withstand the striking of Pettis then the fight could go his way. What Pettis needs to do is use his top notch striking skills and defence to ward off Miller to finish off the fight standing.

Two heavyweight legends collide for the third time. The first was in Pride FC and then in Strikeforce. Since last time they faced each other in 2011 both Werdum and Overeem have improved significantly.

It’s surprising to know that both their winning streaks have been snapped by the current heavyweight champ Stipe Miocic via KO/TKO. For their third meeting, the no. 1 contender spot will be decided. What can we expect from these two title hopefuls? A cautious and slow start where either of them will avoid any mistakes and look to capitalize on each other’s openings.  If Overeem can play the same strategy as he did in Strikeforce, he can very well win his victory via decision.

Leading to the fight, Yoel Romero is back to be the favourite in the betting odds for the Middleweight Interim Title belt fight. Thanks to his super athletic display at the open workouts. Robert Whittaker should be taking notes now on how to deal with this 40-year-old freak of nature. Yoel will be the much explosive fighter in the first two rounds which is what Whittaker must be able to withstand.  And if he does use his movement and evade the crazy jumping knees and grappling he can very well get his hand raised.

There is nothing new these two elite bantamweights have not seen inside the cage. They have faced the best of this division and beaten them all, which is what makes this title contention the most sought-after fight of the night. The last time these two met inside the octagon, it was Amanda’s ground game that made the difference despite her cardio issues in the third round. Since her wins over Miesha and Ronda, the Lioness looked unstoppable. What Shevchenko needs to do is make quick adjustments in the earlier two rounds and display her significant improvements in her ground game.