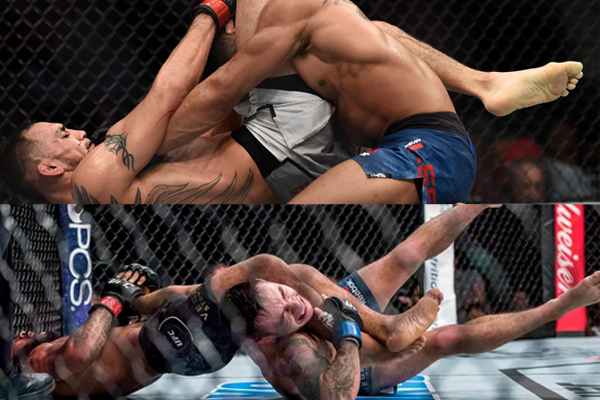 Middleweight Brad Tavares defeated Thales Leites via unanimous decision in the opening fight of the night. Both the fighters engaged in a stand up of punches and kicks for most of the round while little was done to get a takedown by Leites who only managed to pin Brad to the fence. Brad dominated all the three rounds and proved he had a better arsenal of strikes as he landed most of the hard leg kicks taking away the movement from Leites as the rounds progressed. Leites left leg began to give problems as he struggled to keep the pace until a hard-low kick puts him on the ground.

CLIPPED!@BradTavares clips Leites and buckles him in round 1! #UFC216 pic.twitter.com/XWZnSHwJCY

What’s Next: With a win over the #12 Leites, Brad Tavares can expect to break into the top 15 an face bigger challenges like #15 Thiago Santos or Tim Boetsch to avenge his 2014 loss.

John Moraga defeated Magomed Bibulatov via KO in the first round. It just took Moraga 1:38 secs to finish the Russian Magomed using a solid overhand right, a missed head kick and then a left hook combination that sent the eagle flying to the ground. The referee could sense it and rushed in to stop Moraga do any further damage.

What’s Next: Earlier John Moraga who dropped his ranking from #10 to #11 would be delighted to be back in the top 10 rankings with three consecutive wins in a row and such a solid performance.

Matt Schnell defeated Marco Beltran via Unanimous Decision. Matt proved he was the better fighter of the night as he put Marco Beltran through some serious pressure. They both exchanged a lot of kicks but it was Matt who scored most of them as he blocked Beltrans offensive. It was only in the later part of the third round that Marco came back with his own right and left hook but it was not enough in the judge’s scorecard.

First win of his UFC career!

What’s Next: After two straight losses, Matt picked up his first win inside the octagon while Beltran has lost three in a row. Matt’s next fight will be a deciding factor in his UFC career.

Poliana Botelho defeated Pearl Gonzalez via Unanimous Decision. It was Poliana’s striking and takedown defence that landed her a victory in the debut fight. Pearl worked well in the clinch but her takedown attempts were neutralized and was denied of any by the Brazilian. At separate accounts, the referee had to break them up from the clinch as Pearl was unable to find any success. Poliana’s kicks did most of the work as it was evident from the damage Pearl’s leg took for the three rounds.

Those short elbows from @PoliBotelho CAN NOT feel good ..#UFC216 pic.twitter.com/jjyLJMtQme

What’s Next: With an impressive win over an upcoming prospect like Pearl, Poliana has so much more to look forward to in the strawweight division before she breaks into the top 15. As for Pearl, suffering two straight losses facing such tough competition should only make her come back stronger as her skills and full potential are yet to be seen inside the octagon.

Lando Vannata vs. Bobby Green turned out to be a split draw. An illegal knee by Lando Vannata that landed on the head of the downed Bobby Green in the very first round made the referee deduct a point costing him the fight result. It was a back and forth action all through the next two rounds as both the fighters landed some of their trademark strikes. Lando shined in the second round as he landed a solid right that sent Bobby on wobbly legs. In the final round, Bobby came back with his series of jabs that bloodied Lando’s face and in the last finishing rounds came close to finishing him.

OH MY WHAT AN END TO THE FIGHT!!

What’s Next: A draw for both the fighters does nothing to their rankings, but still keeps them in the UFC mix for future lightweight fights. If Lando can improve his fighting style from being less hit and do more damage, his skills can match with many of the higher calibre fighters. For Bobby Green, this could very well be the end of his UFC run unless he’s been offered a last fight to save his place in the lightweight roster.

Cody Stamann defeated Tom Duquesnoy via Unanimous Decision. It was a split decision victory for Cody as he got left behind in the first round by The Fire Kid but came back stronger in the second and third. Tom put the initial pressure on Cody, sent him back peddling as he switched between orthodox and southpaw stances to confuse the American. Cody came back with his takedowns in the second as he spent most of the time on the top position. In the third Cody grew more confident and landed strikes that sent the Frenchman off-balance.

@TomFireKid showing off the stand up here in round 1!! #UFC216 pic.twitter.com/YSJeaxrnip

What’s Next: With two wins in a row and a split decision win, Cody might still need to do some more work in the bantamweight division until his name gets a proper recognition. With a few more wins Cody can look to make his name in this slick division.

Beneil Dariush vs. Evan Dunham resulted in a majority draw. Lightweights Dariush and Evan put on a fight that could get a ‘Fight of the Night’ award. Dariush picked up the first round with his pace and volume of strikes landed on Evan. A pair of big elbows from Dariush hurt Evan and dropped him to the canvas. Coming back in the second, Evan scored a takedown and slowly picked up the pace with another quick takedown. In the final round, both the fighters were swinging for the fences as their strikes got sloppier clearly having an effect from the emptied gas tank.

HELLbows!!@BeneilDariush lands some serious elbows in the clinch and drops Dunham! #UFC216 pic.twitter.com/et8wgusoHT

What’s Next: #14 Evan couldn’t get a win that could take his win streak to 5 in a row, but his ranking is intact. #12 Dariush needs a win at any cost in his next octagon appearance, but as the ladder goes up so does the level of competition. A potential rematch can be booked between these two or they could either face Micheal Chisea, Mairbek Taismov or Anthony Pettis.

Mara Romero Borella defated Kalindra Faria via Submission in round 1. The Italian Mara Romero put on an excellent performance in her debut with a 10-day notice proving everyone that she’s truly an Italian warrior. Romero effortlessly took down the Brazilian in just 30 secs of the opening round and put on a dominant position until there was no option for Faria but to tap out to the rear naked choke submission.

What’s Next: With such an impressive and powerful performance, Romero has announced her arrival in the women’s flyweight division. As the division gets built up, Romero has numerous options to cement her presence in this growing division.

Fabricio Werdum defeated Walt Harris via armbar submission in round 1. As the last-minute replacement Walt Harris stepped in to fill Derrick Lewis and to face the Brazilian submission specialist. There was clearly a huge gap between these two when it comes to striking or grappling. Werdum instantly took Walt to the ground and transitioned to an arm bar.

What’s Next: We’re not sure how serious is the back injury of Derrick Lewis. If he manages to come back quickly then this fight can be rebooked until the UFC heavyweight champion gets to defend his title. With a legit win over the black beast or another heavyweight contender Werdum can vouch for that title fight next year.

Demetrious Johnson defeated Ray Borg via armbar submission in round 5. History has been made, the title of the pound-for-pound no. 1 fighter has been crowned and the flyweight belt successfully defended for the 11th consecutive time. Right from the first bell, it looked as if Johnson was having fun all through the fight as he outclassed Borg in all the five rounds. Borg did manage to show some flashes of brilliance during the second round, but Johnson came back and snatched the round. All through the four rounds, Johnson displayed elite striking, grappling until he suplexed Ray Borg and in mid-air transitioned to an arm bar. That’s some high-level MMA skill and it was done with such brilliance only Johnson could have executed.

What’s Next: There’s absolutely no one to take away from Johnson what he has accomplished. He’s beaten everyone from the division and the only solid contender who could challenge mighty mouse is the Henry Cejudo. In their last meeting Henry got finished quickly, but with an all improved game, he could be legit threat to the title contention.

Tony Ferguson defeated Kevin Lee via triangle choke submission. Ferguson entered the fight looking a bit over confident and cocky – the usual self; many would argue. The first round began on a slow note, but Kevin caught Ferguson with a left high kick, but counters with his own left hook stumbling Kevin for a moment. As the rounds progressed, Kevin began to fade as his gas tank slowly diminished and Ferguson implemented his 10th planet jiu jitsu from the bottom pouring in submission attempts after one another until the arm triangle was deep enough to make the ‘Mowton Phenom’ tap out at 4:02 secs of the third round.

What’s Next: The much-anticipated return of Conor McGregor to defend his lightweight belt, as Ferguson looks to unify the title belts against the reigning champion early next year. Kevin Lee needs to work on his cardio and get past the 3-round barrier which he struggles with.