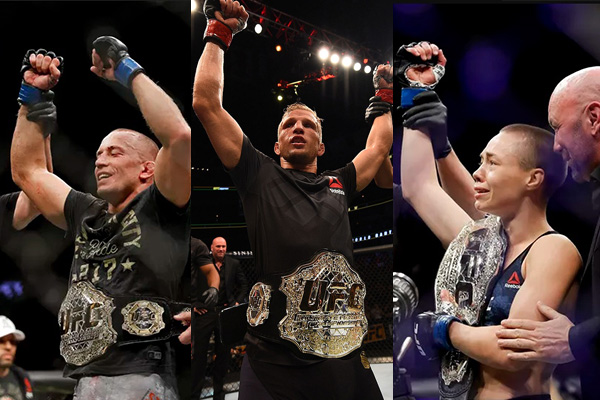 What a night full of shocking upsets and surprises as all three champions tried defending their belts but lost. Rose Namajunas pulled the biggest upset of the year as she stopped Joanna from breaking the record for the most title defences in women’s MMA. She received $50,000 for the ‘Performance of the Night’ bonus. GSP received ‘Performance of the Night’ bonus of $50,000 for his submission win over Bisping. Dillashaw received his share of $50,000 as reclaimed his title for the second time. From the prelims, Ricardo Lucas was lucky enough to get $25,000 for his third round KO win over Zahabi.

Ricardo Lucas Ramos defeated Aiemann Zahabi via KO in round 3. The 22-year-old Ricardo broke Zahabi’s eight-fight win streak as he landed a spectacular spinning elbow at the 1:58 mark of the third round. It was a back and forth first round as Zahabi pushed the Brazilian back with his slick combos and scrambled back after being taken down twice by the Brazilian. Ricardo attempted the spinning back elbow in the second round but missed the mark while Zahabi’s uppercut kept finding its target. In the third round, Zahabi started to overtake with his combinations and uppercut but half way through the round Ricardo landed the big money shot that saw Zahabi taste the canvas for the first time.

OHHHHH!!!!@RicardoRamosMMA lands the spinning back elbow on the 2nd try and puts Zahabi OUT!! WOW!! #UFC217 pic.twitter.com/AhxEz4Fhon

What’s Next: Ricardo is far away from being cracking the #15 spot, as he needs to sharpen his skills and get more experience inside the octagon.

Curtis Blaydes defeated Alexey Oleynik via TKO in round 2. Both the heavyweights slugged it out in the first round as Blaydes took Alexey down twice and landed his combinations that saw him drop to the canvas, but Alexey fought back refusing to go down. In the second round, Alexey came out wild swinging but Blaydes took him with ease. As Alexey was trying to get back up with his one hand and knee on the mat Blaydes threw a kick that seemed to get past Alexey’s ear which made the referee stop the fight to check on Alexey. Referee decided to stop the fight and give the win in favour of Blaydes via TKO at 1:56 secs.

What a freaking end to the round!! @RazorBlaydes265 lands over and over on Oleinik but he stays standing! #UFC217 pic.twitter.com/Q73n6RcT1m

What’s Next: Blaydes now has three wins in a row and with this win over the much experience Alexey should look to get bigger named fighters.

Randy Brown defeated Mickey Gall via unanimous decision. A back and forth bloody welterweight fight that saw Brown land a series of punches pushing Gall back to the fence in the opening round. Gall came back with his own right hand and clinched up against the fence but got taken down by Brown easily who landed solid knees to his body. Gall looked for submissions from the ground but got cut with a big elbow to his forehead from Brown. Brown then showed urgency in the second and took the fight to the ground. Gall gained his own top position and landed elbows weathering out Brown in the second. By coming back in the third, Brown took the fight to deeper trenches as he bloodied Gall to the final round.

Looks like the uppercut for @TouchNGo_ landed, and he jumps all over Gall! #UFC217 pic.twitter.com/1DrluNlZSs

What’s Next: Gall was handed his first UFC loss, but still has got some potential to put on exciting fights. Brown improved his record to 4-2 in the UFC and should continue to pick up more wins until he gets another known name fighter like Gall.

Ovince St. Preux defeated Corey Anderson via KO in round 3. Taking the fight on a short notice seemed like an unwise decision for OSP who out struck by Anderson in the first two rounds. Anderson landed kicks and quickly took OSP down with a double-leg takedown early in the first. But OSP came back and landed a series of punches later in the round and knocked Anderson down before the round ended. Continuing with his wrestling game plan Anderson tried to take OSP down in the third but was unsuccessful. OSP seemed to have found his range and a second attempt at head kick landed on the spot sending Anderson to the mat unconscious at 1:25 secs.

What’s Next: Having fought four times this year, OSP picked up his third consecutive win. His re-match with Shogun needs to happen and a win again would put him back on the top contender list.

Mark Godbeer defeated Walt Harris via disqualification in round 1. The rescheduled fight between these two heavyweights took a bizarre turn when the fight was stopped due to illegal kicks from Harris. Harris who came off from a submission loss to Werdum last month seemed to be in a hurry to pick up the win against Godbeer. Harris landed body kicks and then took Godbeer down where he kept the pressure until Godbeer made a move to get back up. As they clinched, Harris landed the unfortunate low knee and before the referee could step in to pause the fight Harris landed a late illegal kick on Godbeer’s face. Doctor’s declared Godbeer could not continue due to the illegal kick and the fight was called off in his favour.

What’s Next: Godbeer survived this fight with a win but his skills can’t keep him long in the heavyweight division. It’s an uphill task for him as he wants to get past even the low-profile heavyweights.

James Vick defeated Joe Duffy via TKO in round 2. On paper it looked Vick wouldn’t pose any threat to the Duffy, but he shocked everyone in the lightweight division with his performance. In the first round, it was a back and forth action for dominance as both the fighters landed their own strikes. In the second, Vick started finding his range at the end of his jab and until the last 10 secs landed a right uppercut that put Duffy right on the canvas. Following with multiple hammer fists Vick smelled blood and the referee stepped in to stop the fight.

AT THE HORN!!!@JamesVickMMA finishes Duffy in round 2 w/ SECONDS remaining!! #UFC217 pic.twitter.com/1bOKhInhXv

What’s Next: With a big-name victory, Vick has established himself as a legit lightweight who can hang in there with the veterans. He should be looking ahead for some #15 fighters to crack with the next couple of wins.

Paulo Costa defeated Johny Hendricks via TKO in round 2. As predicted this fight was not supposed to go beyond the second as Paulo battered Hendricks with leg kicks that had him wincing in pain. Hendricks tried to come back with his own leg kicks and punches but that only got Paulo more fired up who threw everything he had. In the second round Paulo showed more aggressiveness and landed multiple strikes putting Hendricks in danger zone until the referee stepped in to stop it at 1:23 secs.

They are SWINGING in round 1!!#UFC217 pic.twitter.com/DVOqKlX0Tm

What’s Next: Paulo has been wrecking whatever opponents have been put in front and with a big name win on his resume he can call out another top welterweight fighter. Hendricks looks he is not the same who he once was and with 4-1 record in the last five fights he should rethink his strategy.

Stephen Thompson defeated Jorge Masvidal via unanimous decision. The best welterweights collided and went to war in this deifying bout that would decide their title contention path. Thompson with his usual low guard stance and bouncing off kept Masvidal at distance. Landing his arsenal of kicks, he dropped Masvidal with a lead sick kick. His fast hands also kept Masvidal confused and gliding ahead in the scorecards. Masvidal has little success with his kidks that did no damage to the wonderboy. By the end of third round, it was clear the fight went in Thompsons corner with a clean unanimous decision.

Exchanging blows here in the final round #UFC217 pic.twitter.com/dH4dNVrUhN

What’s next: With a win over top 5 welterweight, Thompson can now climb back to the top and challenge whoever the champion is if gets two more wins next year.

Rose Namajunas defeated Joanna Jedrzejczyk via TKO in round 1. It was Namajunas’ striking that got the champions attention in the opening seconds of the first round as she dropped Joanna on her back with a right left hook right combination. Joanna was stunned by her power and tried to retaliate but thug has other plans as she continued her way with the gazelle punch that eventually saw her crumble down. What makes it even more shocking is that the reigning champion tapped to the strikes even before the referee stepped in to stop it. This has got to be the biggest upset of the year and in the women’s strawweight division.

What’s next: Joanna lost for the first time and her dreams to break the record have been shattered. She can challenge Rose for a rematch but with such a clean victory it might look a bit difficult. Instead she can challenge the #1 strawweight for the title contention fight.

T.J. Dillashaw defeated Cody Garbrandt via TKO in round 2. Bad blood and rivalry between the former team mates comes to a shocking halt as Dillashaw snatched the title from the heavily favoured champion. Cody was at his usual self of mocking and taunting as he landed some big shots and dropped Dillashaw in the opening round. Dillashaw kept on coming back with his slick footwork and leg kicks but Cody’s heavy hands had him at every time. As Cody danced around in the second, Dillashaw landed a head kick that landed his on the canvas. As they exchanged shots, a solid right hook from Dillashaw had him roll his eyes up at 2:41 secs of the second round.

The hooks have found homes tonight in the title fights 😳@TJDillashaw #UFC217 pic.twitter.com/BXNj4lwY79

What’s next: Dillashaw sits at the top of the mountain having reclaimed his belt for the second time. In his post-fight he challenged Mighty Johnson’s record and his belt which would make an interesting superfight in the future.

Georges St. Pierre defeated Michael Bisping via rear naked choke submission in round 3. Having to stay away from the sport for the last four years, ring rust was not an issue for GSP. But having to put on more muscles in this division, his striking speed and takedowns were a bit slower. Bisping could not showcase his full potential as he was hesitant and always on lookout for GSP’s takedowns. He got taken down multiple times by GSP who had a clear game plan. Bisping could land some elbows from the bottom but that was not enough as he eventually got his back taken and choked unconscious at 4:23 secs of third round.

What’s next: Having run out of quality challengers in the welterweight division, GSP could hang in and defend his middleweight title. As the rightful champion, he has to defend his it, but this stacked division would be too much for him.