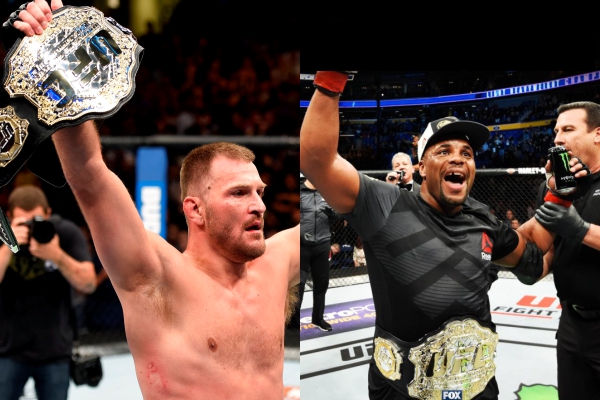 Stipe Miocic defeated Francis Ngannoua via unanimous decision. By weathering the storm that is Francis Ngannou in the first round and playing his strategy well Stipe literally exposed the one-dimensional predator. Francis had very little success in the first round as he landed few heavy shots and defended the take downs well. But he got predictable, Stipe started to implement his game plan. Right after the first round, Francis was all gassed out unable to continue the same pace. Stipe’s excellent wrestling and ground game made Francis confused leaving him clueless on the ground. As the rounds progressed, Francis looked more and more tired. It was clear he was a beaten man in every round. Stipe’s victory marks the new era of heavyweight championship with three successful title defences.

The champ is in great form tonight! #UFC220 pic.twitter.com/CPkya7PWtI

Daniel Cromier defeated Volkan Oezdemir via TKO. With the ring of the bell, Cromier had only one game plan – to take Volkan to the ground and submit him just like he did his team mate. Volkan’s hands start flying and look to connect to the champion. Cromier takes some shots from Volkan but stays unfazed. Cromier now begins to unload with his own left and right. He hits back Volkan with a big left and stuns his right eye. Cromier then takes the fight to the ground in closing moments and is near to finish Volkan with a choke but time runs out. By the end of the first round, Volkan is a broken man unable to solve the puzzle. In the second round, Cromier needed just 20 secs before he takes Volkan to the ground and has him in the crucifix position unable to defend the punches. Volkan is locked and trapped – the referee had seen enough and stops the fight at 2:00 of the second round.

He's hurt him!@DC_MMA is laying on the damage in the first! #UFC220 pic.twitter.com/zPmKFNIZbY

Calvin Kattar defeated Shane Burgos via TKO. Shane draws the first strike with a jab, left hook and another jab. Calvin realizes the fight is on and tries to find his range with constant lefts and rights. He keeps finding Shane’s head with every strike and counter strike from his end. Shane just keeps eating them like their nothing, but  his face is turning into red. They both go back and forth to end the first round but Calvin is clearly ahead in the scorecard. Shane gets a pep talk and comes back a different fighter. His pressure is working and bloodies up Calvin’s face as the round ends. As the third round opens, Calvin lands a big overhand right and sees an opening and lands a straight right that wobbles Shane. The uppercut seals the deal and sends Shane to the mat where the fight is stopped.

Gian Villante defeated Francimar Borrosa via split decision. Villante opened the first round with a big over hand right and quickly senses the fear in Borrosa’s eyes. Borrossa looks nervous as he backs up against the cage to every strike from Villante. His only success come from few leg kicks and strikes to the body. But Villante kept the pace going with second. In the second round, the fight turned into a brawl for a moment when both these light heavyweights engaged into a telephone booth fight. With this win Villante snaps his two fight losing skid.

😳@GPVillante's uppercut has Barroso on his heels early. #UFC220 pic.twitter.com/WiVoHRFJDo

Giving it all they got. 😤

The LHWs continue to round three in Boston. #UFC220 pic.twitter.com/zI1yG3BPUD

Rob Font defeated Thomas Almedia via TKO in round 2. Rob Font comes out with a single minded strategy – to systematically pick apart Almedia with his aggressive pace and constant pressure. Almedia counters with his kicks but is slow to open up while Rob continues to move ahead as the first round comes to a close. In the second round, Rob lands a crisp jab and cross that stumbles Almedia for a moment. Rob unleashing some body shots on to Almedia who is backed up. Almedia throws a left which Rob slips to and lands a head kick. Almedia is in deep trouble as Rob lands multiple uppercuts to drop him to the ground as the referee steps in to stop the fight at 2:24 secs of round 2.

Kyle Bochniak defeated Brandon Davis via unanimous decision. With the home town backing, Kyle dominated the fight right from the beginning as he moved away from the power shots of Davis and landed his own key strikes and picking up the points on judges scorecard.

Kyle Bochniak wins in front of his hometown Boston fans by unanimous decision to beat Brandon Davis at #UFC220 https://t.co/x1hOH9GXKr

Abdul Razak Alhassan defeated Sabah Homasi via KO. This was the second fight between these two guys but the result was the same. After a brief moment of clinching and brawling Razak lands a solid right upper cut sending Homasi to the ground like a fallen tree.

Dustin Ortiz defeated Alexandre Pantoja via unanimous decision. Three rounds of back to back action from both the flyweights, but Ortiz had the better striking and take downs.

Action is heating up at the end of round two. #UFC220 pic.twitter.com/rCSaPVJsm4

Julio Arce defeated Dan Ige via unanimous decision. Both Julio Arce and Dan Ige who got the shot from their DWCS appearances brought all in for their first big UFC fight. Julio Arce proved to be the better fighter tonight with his crisp striking combinations.

A huge right by @JArceTSMMA highlights round one. #UFC220 pic.twitter.com/zqOAuIU1Ma

What a body shot!@JArceTSMMA is doing DAMAGE in the third. #UFC220 pic.twitter.com/o61HPRxBET

Islam Makhachev defeated Gleison Tibau via KO. A big left hand from Islam lands right on the button and down goes Tibau. Now that’s how you kick off the card with a solid KO win in just 57 secs of the very first round.

OUT OF NOWHERE!@MakhachevMMA opens up #UFC220 with a BANG! pic.twitter.com/gz3bS2lY6a