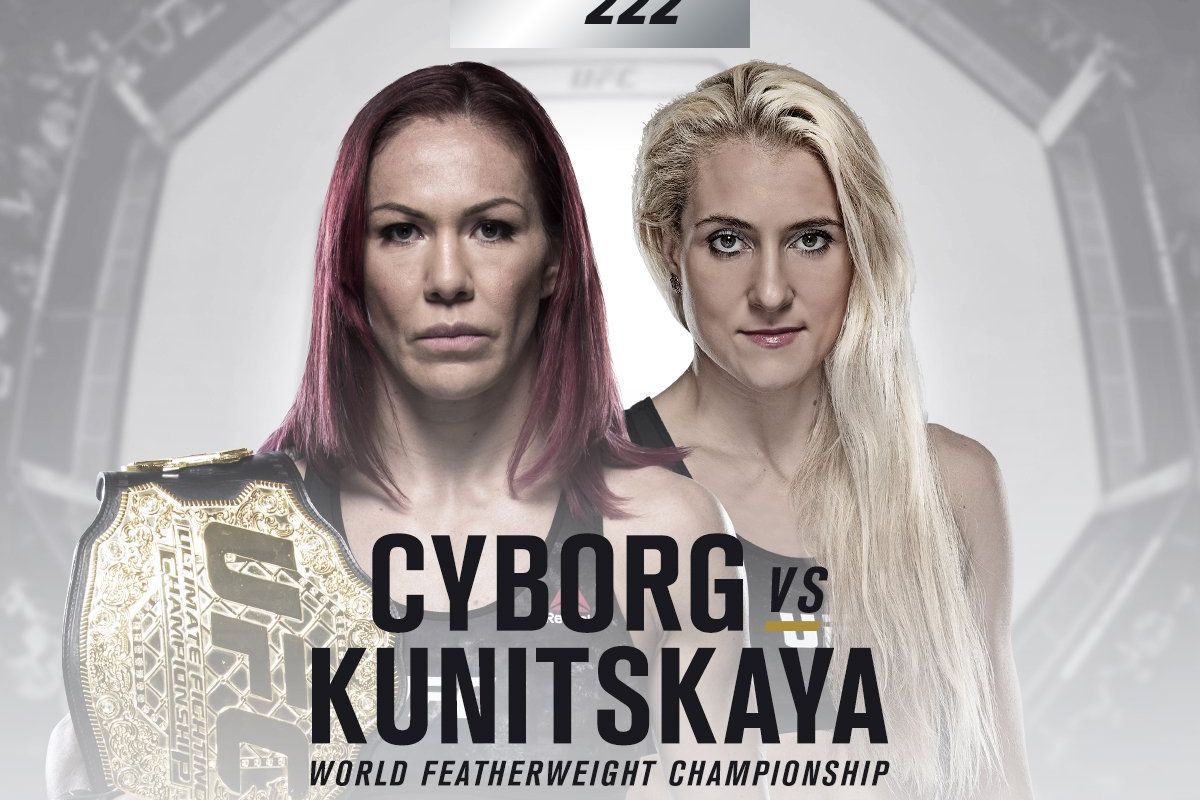 UFC 222 is now in the books. The PPV which was initially scheduled to be headlined by a fight between the UFC featherweight champion, Max Holloway and Frankie Edgar, was instead headlined by Cris Cyborg and Yana Kunitskaya. Holloway was forced to pull out due to a leg injury, whereas Edgar instead competed against surging top contender Bryan Ortega. The fight card also featured many other exciting fighters such as Andre Arvloski, Bryan Caraway, Mackenzie Dern, Cat Zingano, etc.

It’s safe to say that the event seemingly did deliver and was one of the more enthralling fight cards of 2018 so far. However, even if you missed the PPV, we’ve still got you covered. Thus, here are the results for UFC 222.

Welterweight: Zak Ottow def. Mike Pyle via TKO due to punches (Round 1; 2:34)

^Lombard was disqualified after hitting Dollaway twice after the belt, rendering Dollaway unable to continue.

Zingano looked slow and even a bit sluggish during the striking. She was always constantly countered by Vieira. Zingano looked for a few times but Vieira was simply the better grappler and instead landed easy takedowns on Cat and grounded-and-pounded her way to victory.

On the feet, Arvloski always fought from outside boxing range and looked for leg-kicks, and counter shots whereas, even though Sruve had a huge reach advantage, he still tried to close the distance. Arvloski also constantly took the Dutchman down and forced him to clinch. ‘Pitbull’ controlled the fight and got a relatively easy victory.

As the fight began, “The Asian Sensation” looked to be carrying a leg injury. He was soon picked apart by O’Malley and was almost knocked-out in the first round but was saved by the bell. O’Malley was teeing off on Andre for two rounds but then himself got injured. In the final round, Andre tried to take advantage of O’Malley’s injured leg and tried to finish him on the ground. However, his efforts weren’t enough and O’Malley survived to get his hand raised.

The size difference was huge and played a big role in the bout. Edgar looked sharp in the initial exchanges and his punches were constantly landing on Ortega’s body or face. However, Ortega seemed to barely feel any of the punches and soon began to showcase much better movement. Ortega soon found his rhythm and then wasn’t getting hit too much, instead started successfully countering Edgar’s shots. In a particularly spectacular striking exchange, Edgar went for a jab as Ortega dodged and hit Edgar with a short elbow for which, “The Answer” had no answers. The elbow visibly stunned Edgar, he was then hit by a few wild punches and then with a scary, precise uppercut that literally launched Edgar off of his feet (Pretty Ngannou-Overeem esque uppercut). Edgar dropped down as the referee stepped in to save him from further punishment.

The man with an iron chin, FRANKIE EDGAR GOT KNOCKED OUT! Ortega made a statement, Holloway should be really careful if the “Blessed Era” has to continue.

Kunitskaya shocked a lot of fans and for a while was causing Cyborg some troubles. However, the best female fighter on the planet came back and hit her opponent with a big hook which knocked Kunitskaya down. As soon as the challenger got back to her feet, she was again dropped by a body kick and a big right rand to the face. Cyborg the grounded-and-pounded on her till the referee stepped in to stop the bout.

UFC: Brian Ortega down to fight TMZ anchor’s 78-year old grandmother if the money is right