UFC 222 is now in the books and it turned out to be a rather exciting event. The pay-per-view was headlined by a bout between UFC women’s featherweight champion, Cris Cyborg and the former Invicta FC bantamweight contender, Yana Kunitskaya. The Brazilian emerged victorious and is now on looking ahead to defend her title in a super fight against fellow Brazilian and the current UFC women’s bantamweight champion, Amanda Nunes. The rumours have again picked up a lot of steam after Cyborg’s victory on the weekend. While fighters seemingly try to avoid facing Cyborg, there’s one fighter who is indeed to quite eager to face her, i.e. Megan Anderson. She recently took to Twitter and congratulated Cyborg on her victory and then proceeded to call her out for a potential fight.

Cyborg is a Brazilian mixed martial artist with a MMA record of 20-1-1. The only blemish on her record came in her professional MMA debut against Erica Paes via submission due to a kneebar. She has since then been on a record breaking winning streak and has easily demolished almost all of her opponents. On the other hand, Anderson is a relative new-comer in the world of MMA and has a record of 8-2. She became the Invicta featherweight champion by defeating Charmaine Tweet via TKO and hasn’t fought ever since.

The pair were scheduled to face each other at UFC 214. However, the Australian had pulled out of the fight citing some “personal issues” as the reason. She was instead replaced by Tonya Evinger for the event.

The speculation about a fight between Cyborg and Nunes intensified after Dana White claimed in UFC 222’s post-fight press conference that the fight must happen. However, Anderson seemingly has other plans and instead wants to take on the Brazilian. She first congratulated Cyborg and then called her out. Here’s the tweet by Anderson: 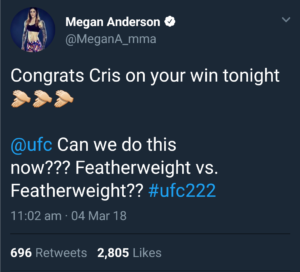 A while later she sent out another tweet and tagged Joe Rogan, Daniel Cormier, Jon Anik in it and asked them whether they want to see Cyborg fight a true featherweight, who is bigger and has more power than her. Here’s the other tweet: 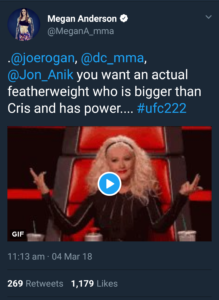 Previous article
UFC:Featherweight Champion Max Holloway has a classy message for Frankie Edgar after loss at UFC 222 against Ortega
Next article
Photos- The Mike Pyle Story