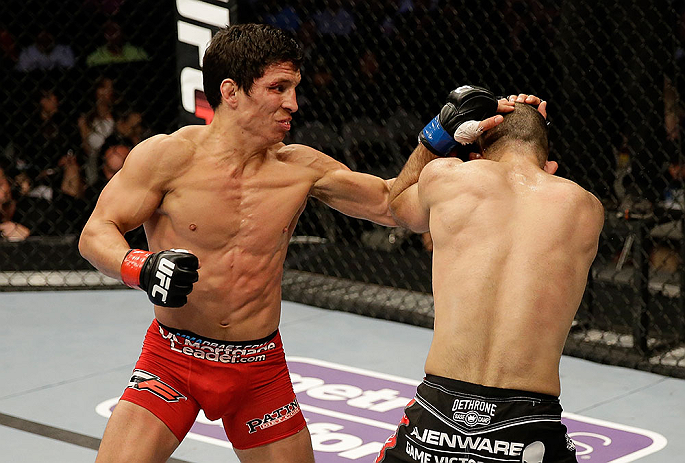 UFC 225 is scheduled to take place in Chicago, on the ninth of June. The event is likely going to be a marquee PPV, because the UFC have generally made spectacular fight cards for Chicago. Such pay-per-views generally consist of popular fighters and some exciting match-ups. The UFC have just booked a highly exciting fight between one of the world’s best MMA flyweights, Joseph Benavidez and top prospect, Sergio Pettis for UFC 225. 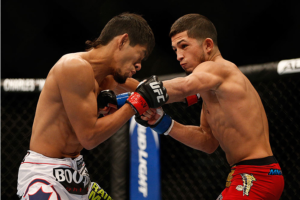 Benavidez has a MMA record of 25-4 and a UFC record of 12-2, with both his octagon losses coming against the UFC flyweight champion and the current pound-for-pound kingpin, Demetrious Johnson. “Joe B Wan Kenobi” has been on a six fight winning streak since he was knocked out by a brutal punch from “Mighty Mouse” at UFC on Fox 9. He has had some notable victories, in this winning streak, over fighters such as Tim Elliot, Henry Cejudo, John Moraga, etc. He hasn’t fought in over a year and his last victory was against Cejudo via a highly infamous and controversial split decision at the TUF 24: Finale. He was scheduled to face Ben Nguyen at UFC Fight Night 110 last year. However, he was forced to pull out due to a knee injury. On the other hand, Sergio Pettis was on a surging four fight win streak himself but lost his momentum when he was defeated by Cejudo at UFC 218. He has a MMA record of 16-3 and will be looking to gain his lost momentum.

The UFC 225 fight card is turning out to be a great fight card so far. Apart from the flyweight bout, a heavyweight match-up between Rashad Coulter and Allan Crowder has also been booked, while a women’s strawweight match between Claudia Gadelha and Carla Esparza has also been added.

There had been a lot of rumour about a potential fight between the veteran flyweight and the young prospect. All the rumours turned out to be true, when the fight was officially confirmed by a tweet posted by Benavidez on Twitter. Here’s what the flyweight tweeted: 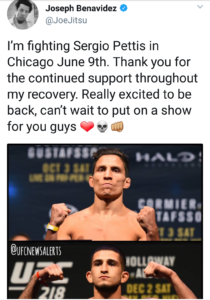 Both these fighters have contrasting styles of fighting. This is a classic grappler vs. striker battle. The match-up is highly intriguing and might secure a title shot for whoever ends up being victorious.