The injury to Luke Ruckhold shook up the entire row of events in UFC 230 .Rockhold who was supposed to fight Chris  Weidman  in the event was forced to pullout following his leg injury and Jacare Souza was moved from his main card bout with David Branch (22-4MMA,4-3 UFC)to fill in for Rockhold leaving Branch left without an opponent. 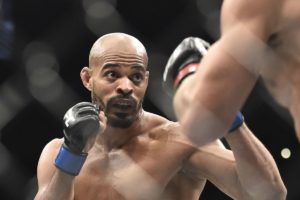 But the issues have been resolved with Jared Cannonier(10-4MMA,3-4UFC) stepping up to fight Branch at UFC 230 at Madison Square Garden.The news came out via a recent report by ESPN’S Brett Okamoto which was also later confirmed by other media sources.

Jared Cannonier has accepted the fight against David Branch, per Dana White. Branch stays on the UFC 230 card, after Jacare moves to Weidman.

Cannonier was scheduled to fight Alessio Di Chirico at UFC Fight Night 140 on Nov.17 in Argentina.Instead of that he will make his way to MSG for a main card clash with David Branch.Cannonier had a poor 1-3 run in the light heavyweight division and has decided to drop to 185 lbs for his upcoming fights.His last loss included a knockout loss to light heavyweight Dominick Reyes.

Branch on the other hand was rising high following a 1st round knockout victory over Thiago Santos at UFC Fight Night 128 in April and got a high profile match against Jiujitsu and MMA legend Jacare Souza.But the injury to Rockhold cost him indirectly as Jacare has been replaced to fight Weidman.Now his foremost priority lies in defending his post against the “Killa Gorilla” Cannonier.

Previous articleThe official poster for UFC 230 finally released…and it’s been worth the wait!
Next articleDana White knows which fight is next for Khabib…and it’s not Conor (or Floyd)