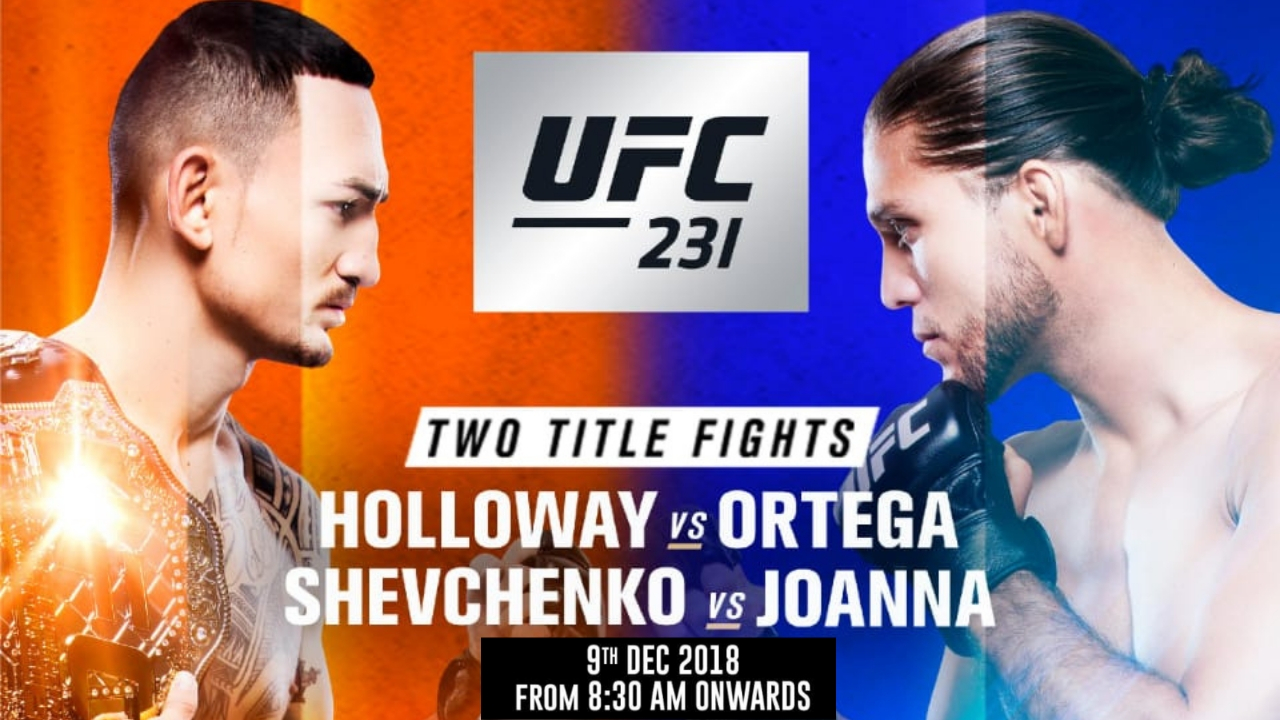 After one event in Las Vegas and another Down Under, it’s time for the UFC Octagon to cross into Canada for the third and final time this year. UFC 231 takes place at Scotiabank Arena which is a multi-purpose arena and home to many Canadian Teams like the Toronto Maple Leafs of the National Hockey League (NHL), the Toronto Raptors of the National Basketball Association (NBA) and the Toronto Rock of the National Lacrosse League (NLL)

UFC 231 brings the best featherweights on the planet and the evening’s main event is headlined by the highly anticipated Featherweight Title bout between champion Max Holloway and challenger Brian Ortega. The co-main event will feature the women’s bout between Valentina Shevchenko and Joanna Jedrzejczyk battling for the vacant flyweight strap.

This much-anticipated bout was first scheduled for July but due to unforeseen circumstances got rescheduled to December 2018. Since then, Max Holloway anxiously awaits his next title defense. The young Hawaiian is on an unbelievable run with 12 straight wins, including a pair of TKO victories over legendary former featherweight champion Jose Aldo. During his tenure at UFC, Max Holloway has displayed solid striking and footwork fundamentals and is improving his creativity and range with a diverse arsenal of attack. This building nature of the champion makes him stand out from the rest of the featherweight stable.

Brian Ortega remains one of the few fighters in UFC who is undefeated over his entire career, including seven straight fights in the UFC. His winning streak in UFC has not to quiet matched Holloway’s in terms of quantity but is as impressive in terms of quality. The Californian became the first fighter in history to earn a KO win over Frankie Edgar and will look to become the undisputed champion in the Featherweight Division. Ortega’s style is built completely around knocking out his opponent off the perch but if he adds more finishing weapons to his arsenal, he will truly become the fighter everyone dreads

This is the best of the best facing off in the featherweight division as Holloway attempts to defend his title and Ortega looks to dethrone him.

Valentina Shevchenko debuted in the Flyweight division earlier this year and since then “The Bullet” has been anxiously awaiting her shot at the new UFC women’s flyweight title. The multiple-time Muay Thai champion has had one previous fight in the flyweight division when she completely pulverized Priscila Cachoeira back in February. Meanwhile, her opponent Joanna Jedrzejczyk is a former Strawweight queen who is looking to become the first female two-division champion. This won’t be the first time these two women have squared off as they have fought each other three times with Shevchenko coming out victorious on all three occasions. The former Strawweight queen has revenge all over her mind and will look to settle her past business which makes this bout one of the most exciting along with witnessing the early reign of the best flyweight champion of all time.

Previous articleDominick Cruz set to return at UFC 233 against John Lineker
Next articleColby Covington has only one fight he will accept and that is for the Undisputed belt!