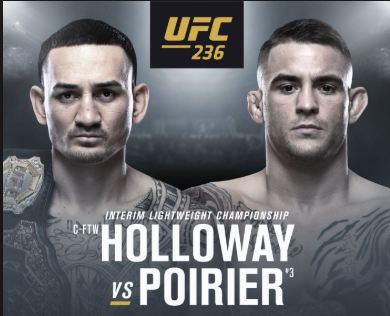 A pair of interim title fights are headlining UFC 236 at State Farm Arena in Atlanta this weekend. With Lightweight champ Khabib Nurmagomedov serving a suspension and top contender Tony Ferguson not fighting due to personal reasons, Featherweight champ Max Holloway will look to follow in the footsteps of Conor McGregor and become a two-division champion but, will face stiff competition from his counterpart, Dustin Poirier who has long dreamed of becoming a UFC Champion. In the co-main event, Kelvin Gastelum takes on Israel Adesanya for the Middleweight Interim Title.

This rivalry dates back to 2012 when 20-year old Max “Blessed” Holloway made his UFC debut as he replaced Ricardo Lamas at UFC 143 to face Dustin “The Diamond” Poirier. The result of the fight at UFC 143 was in favour of Dustin but will UFC 236 act as a retribution The Blessed or will The Diamond steals the limelight from the Featherweight champ ?

Max “Blessed” Holloway should be one of the UFC’s most revered champions. After spending more than seven years with the UFC, Holloway has defined his career as the best featherweight within the roster while riding on an unprecedented 13-fight win streak that includes a pair of wins over legendary former champion Jose Aldo. If one looks at Max Holloway’s fact sheet, they would know that he is known for breaking many UFC records such as – Longest winning streak amongst active UFC Fighters (13), Most UFC featherweight victories in history (15) and Most significant strikes landed during UFC competition (1,627). Addressing to the media, Max said “To be the best, you got to beat the best and the best is the Blessed who is me. It’s all about proving yourself. Everybody can talk the talk but I want to show the world that I can walk the talk too. I think this will be my best performance you ever saw stepping inside the Octagon. I always try to out-do my last performance. There is no difference between the first fight and this fight but the right thing to do is return the favour and I intend to do that by knocking him out”

Dustin “The Diamond” Poirier has been demolishing everybody in his path since moving back to 155 pounds. In his last three fights, he has stopped future Hall of Famers and former champions Anthony Pettis, Justin Gaethje and Eddie Alvarez. Addressing the media before the highly anticipated rematch of UFC 143, Dustin said “When you get an opportunity to fight for the world title you don’t second guess it. I am always evolving like a student and pushing myself to be better and at UFC 236 I have the chance to be the best in the world. I have fought Anthony Pettis, the former World Champion and beat him, fought Justin Gaethje and beat him followed by a win over another world champion, Eddie Alvarez and now I am looking forward to making it four out of four by beating Max. Seven years later I am going to beat Holloway…..Again!”

Both fighters on an average land highest significant strikes per minute. Also, Holloway and Poirier have jointly bonuses and consecutive finished in their last seven fights. All the facts add up to a blockbuster main event in the State Farm Arena to win the interim lightweight title.

Since arriving in the UFC 14 months back, Israel Adesanya will be in the Octagon fighting for the middleweight title after winning all his past five bouts. The interim UFC middleweight title will be on line when the Nigerian born New Zealand professional will face Kelvin Gastelum at the State Farm Arena in Atlanta.

Kelvin Gastelum was supposed to face Robert Whittaker back in February at UFC 234, but the then reigning middleweight king had to undergo emergency surgery that ultimately forced him to retire from that contest. Now Gastelum will look to become a UFC champion for the first time in his career while facing one of the brightest young stars in the entire sport.

Gastelum has arguably one of the most impressive resumes for a UFC fighter as has successfully knocked out some famous fighters like former champion Johny Hendricks, recent hall of fame inductee Michael Bisping and world-class submission artist Jacare Souza. In a recent media conference, Gastelum stated that he doesn’t think Adesanya deserves this shot because he hadn’t been through “the fire” that he had to go through to get there.

Adesanya burst onto the scene just over a year ago, but has since racked up dominant victories against top 15 opponents like Anderson Silva, Derek Brunson and Brad Tavares. Speaking to the media about his preparation for this fight, the Nigerian born New Zealand professional said, “I was just fighting and staying active, not rushing the process and enjoying it as it came. This was the main goal the whole time to be the UFC champion and here I am now. This is a different chapter in my life and now I have no reservations for anyone else’s thoughts. One of the main things is I’m older, I’m wiser, so it’s liberating in the sense that it’s all up to me. You get to be the master and write your own destiny. I always bring something different, so my advice to people when they watch or fight me is to expect the unexpected’

Much like the main event, Kelvin Gastelum and Israel Adesanya know how to put on a show and this promises to be another jaw-dropping interim title fight taking place at UFC 236.

Previous articleJoe Rogan on TJ Dillashaw: I’m a fan of his but the EPO taints his legacy
Next articleMax Holloway wants the Khabib fight in the future: He barely loses a round. That’s a pound for pound guy!