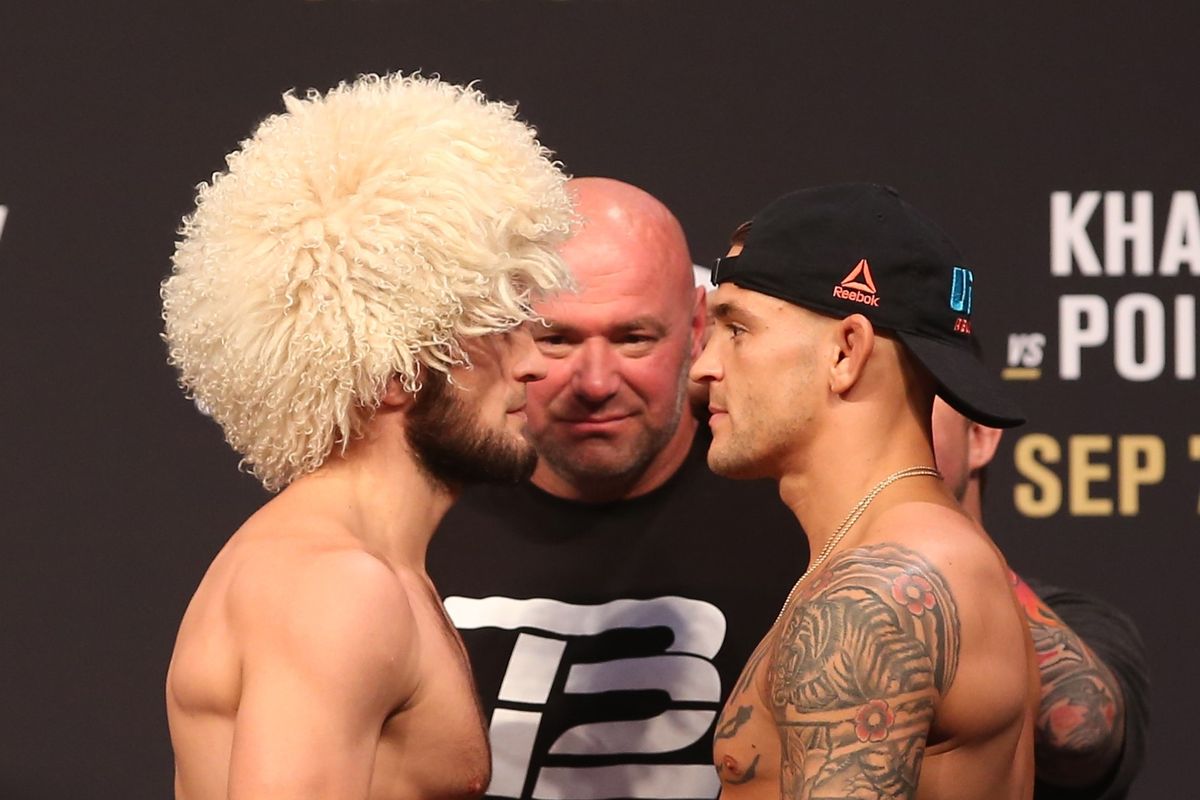 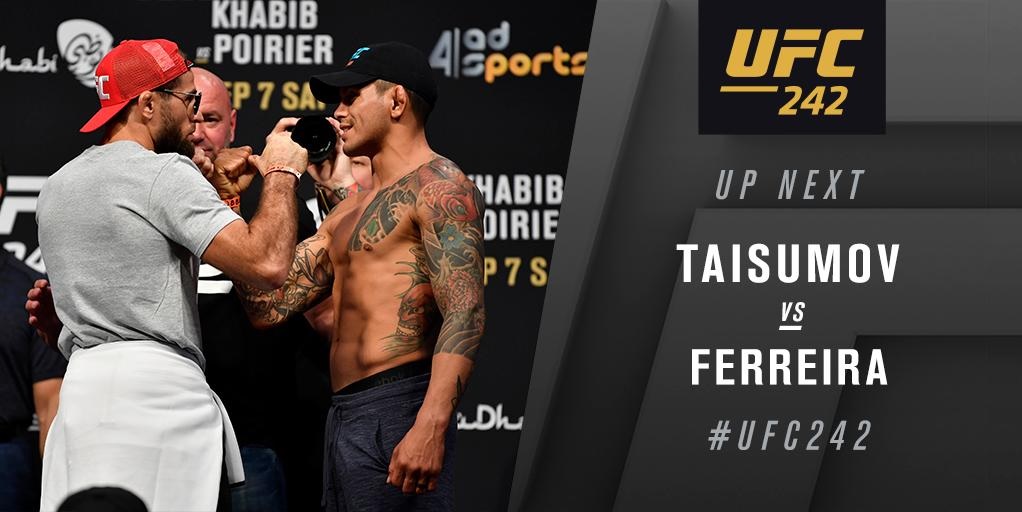 The opening bout of the main event saw two experienced lightweights square off in an all out striking match. The Russian Powerhouse Mairbek Taisumov despite being away from the Octagon for an year entered the fight, a heavy betting favorite against Diego Ferreira. But the Brazilian surprised everyone with his accurate striking and relentless pace, earning him the biggest win of his career. Diego set the tone of the fight with his pressure and kept Taisumov on his back foot right from the first round. It was unusual to see Taisumov been subjected to such pressure and being controlled on the feet. Seemingly out of his element, Taisumov struggled with this striking output but landed some shots that made Diego take notice. Except for a solid calf kick which shook Diego, Taisumov shied away from landing any of his trademark shots. Diego being the much busier fighter, continued to land more shots per minute and his frequency only kept increasing in the second and third round. Tired, bloodied and unable to cope up with Diego’s non-stop pace, Taisumov looked confused with his own performance. With this win, Diego is now on a five fight win streak and could very well get a ranked opponent in his next appearance.

Curtis Blaydes defeated Shamil Abdurakhimov via TKO in Round 2 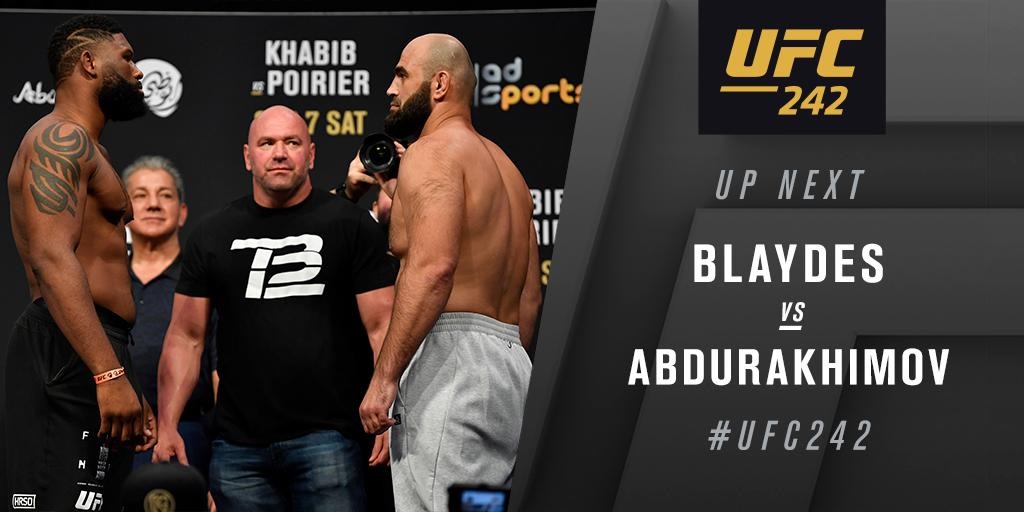 That's how you end a round! 😤@RazorBlaydes265 is on a MISSION! #UFC242 pic.twitter.com/oOYYkxvIS3 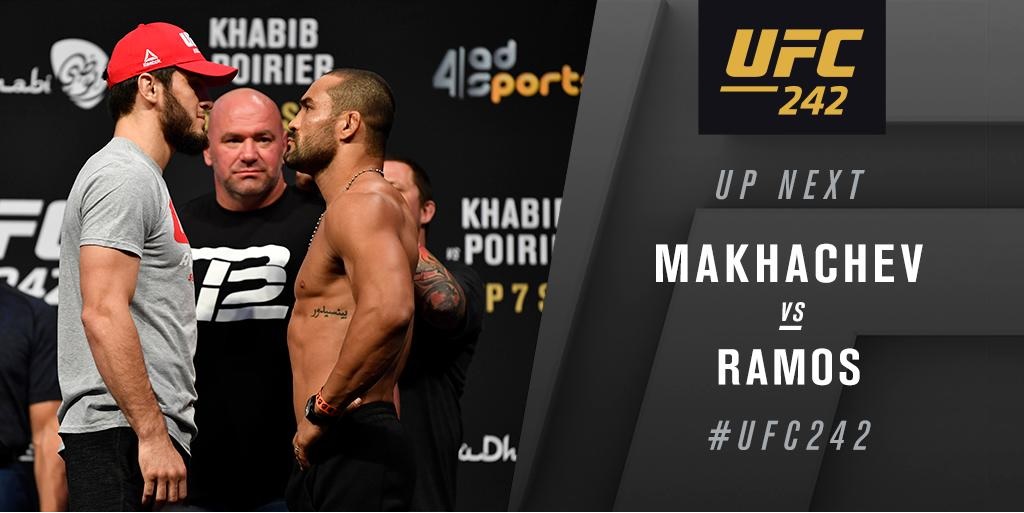 Davi Ramos had never been taken down inside the Octagon. But Islam Makhachev proved, there’s a first for everything. Makhachev not only dominated Ramos on the feet, but for most of the third round secured the top position and turned the fight around. But the fight got a slow start as both the lightweights were hesitant to engage and had to settle with low output. Ramos waited a but more on Makhachev which only led to the Dagestani to be more aggressive. Ramos looked to take him down, but with a strong defense Makhachev neutralized the Brazilian’s offense. A stiff left hand from Makhachev staggered Ramos for a second as he began to bleed from his nose. Makhachev’s carefully handpicked shots were more accurate and did most of the damage. With this win, Makhachev is now on a six fight win streak and looking to challenge the winner of Felder vs. Barboza.

🇷🇺 @MakhachevMMA refuses to leave without the win! #UFC242 pic.twitter.com/k8wuTgpyRp

"I will be ready!" 😤@MakhachevMMA wants the winner of the co-main after his UD win! #UFC242 pic.twitter.com/cwV4F5UvSw

The co-main event of the night is a rematch five years in the making between Felder and Barboza. Their first fight was the 2015 Fight of the Night as both the light weights put on a splendid performance. After losing the first fight via decision, Paul Felder wanted to get back in the octagon with Barboza and redeem his first UFC loss. But the Irish Dragon had to dig deep and pull out the best version of himself to get a split win. Barboza was there with his leg kicks every time Felder attempted to land. Barboza began to land punches and elbows which only resulted in Felder taking serious damage to his face. Sensing an urgency in the second round, Felder starts breathing fire and walks through Barboza’s leg kicks. In the final round, both the fighters engage in a vicious exchange swinging for the Fences. The fight is close, and either of the fighter could take it away. But the judges score a split decision in the favour of Paul Felder who is bursting with tears of joy and happiness.

Fight of the Night!? #UFC242 pic.twitter.com/a7fBiUFyS3

Khabib Nurmagomedov successfully defended his lightweight title belt for the second time and has proven once again why he is the ‘best lightweight’ in mixed martial arts today. Khabib put ‘performance’ in the ‘performance of the night’ as he choked out Dustin in the third round to unify the lightweight titles. Khabib improved his record to 28-0 as he pushed Dustin to the brink for three rounds before wrapping the rear naked choke at 2:06 of the third round.

Dustin was confident in his wrestling and his preparation to get back up every time he would be taken down. But things didn’t go his way once the fight went to the ground. Though Dustin was able to slowly pick Khabib with his striking, he could not implement his game plan due to the exhaustion of punishing ground control. Khabib was always looking for a submission but Dustin was able to avoid them as he tried to work his way back to the feet. But Khabib unloaded some heavy shots from the top, causing Dustin to bleed and slip into survival mode. Dustin’s attempt to tag Khabib ended when he was taken down for another time and briefly kept on the mat managing Khabib’s weight on his back. In the third round, Dustin’s only hope came in the form of a guillotine choke but after spending too much energy, Dustin was exhausted and gave up his back. Khabib set up his submission by slipping his arm his arm under Dustim’s chin. Dustin had no choice but to tap out.

"At his mauling best in round one!" 🦅