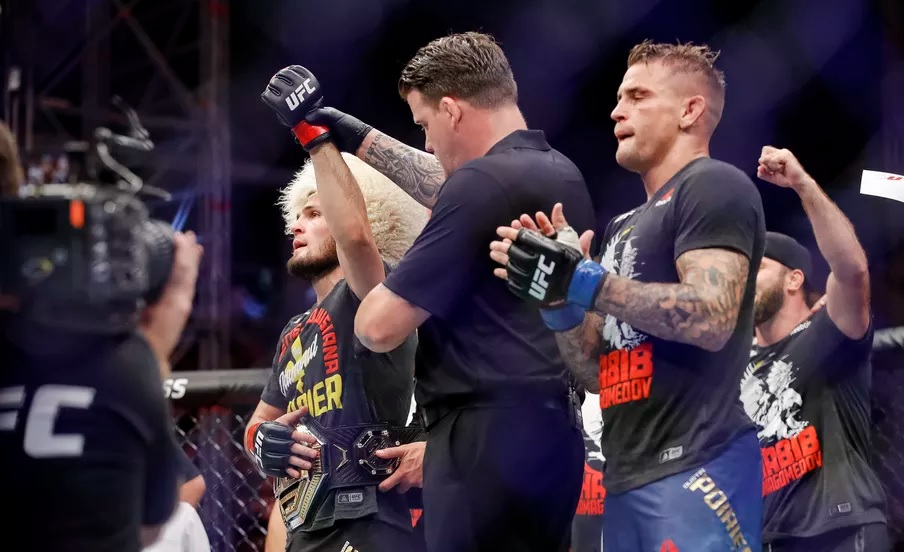 Khabib Nurmagomedov successfully defended his lightweight title belt for the second time and has proven once again why he is the ‘best lightweight’ in mixed martial arts today. Khabib put ‘performance’ in the ‘performance of the night’ as he choked out Dustin in the third round to unify the lightweight titles. Khabib improved his record to 28-0 as he pushed Dustin to the brink for three rounds before wrapping the rear naked choke at 2:06 of the third round.

Dustin was confident in his wrestling and his preparation to get back up every time he would be taken down. But things didn’t go his way once the fight went to the ground. Though Dustin was able to slowly pick Khabib with his striking, he could not implement his game plan due to the exhaustion of punishing ground control. Khabib was always looking for a submission but Dustin was able to avoid them as he tried to work his way back to the feet. But Khabib unloaded some heavy shots from the top, causing Dustin to bleed and slip into survival mode. Dustin’s attempt to tag Khabib ended when he was taken down for another time and briefly kept on the mat managing Khabib’s weight on his back. In the third round, Dustin’s only hope came in the form of a guillotine choke but after spending too much energy, Dustin was exhausted and gave up his back. Khabib set up his submission by slipping his arm his arm under Dustim’s chin. Dustin had no choice but to tap out.

"At his mauling best in round one!" 🦅