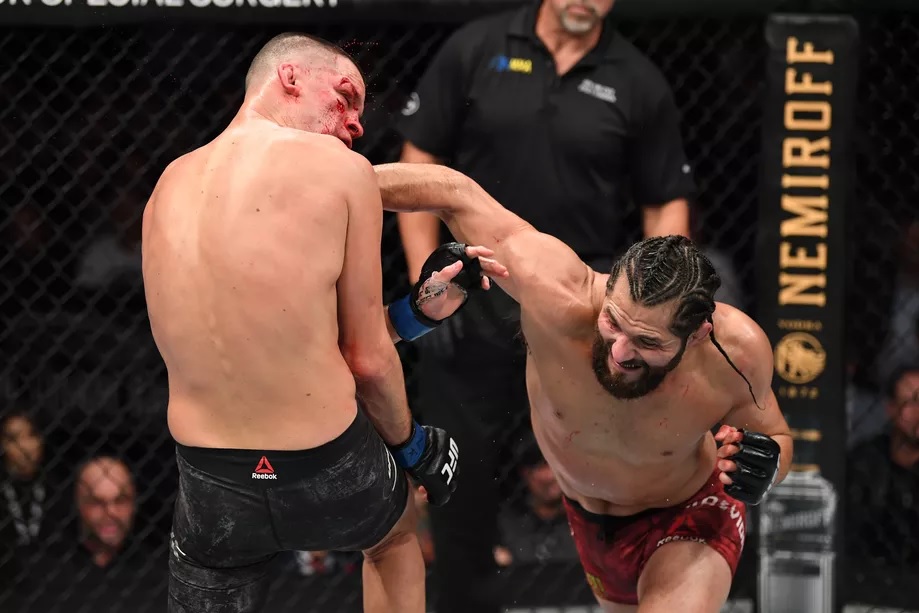 The BMF title is on the line in the main event and The Rock cage side ready to wrap it around the winner of Masvidal vs. Nate. Noting their splendid victories earlier this year, this fight was expected to be an all out stand up war. The fight started off with a great start as both the welter weights walked straight to each other looking to pressurize right away. Diaz got the better of it and quickly set the pace with a series of punches.

Once they were locked in the clinch, Masvidal blasted Nate with a nasty elbow and as Nate wobbled a leg kick landed right on the forehead to drop Nate on the mate. For a moment it seemed Masvidal was close to finish the fight, but knowing how tough Nate was the ending never really came. Diaz turned the heat up late in the first round with a bunch of punches that connected on Masvidal.

Diaz continued to out pour the pressure in the second round, but Masvidal over powered him and made him pay once again with a devasting counter right hand. The cut above Nate’s right eye was causing him problems, but the Stockton native was very much in the fight. Diaz just refused to go back down and Masvidal was doing all he can to put him away. Leg kicks, body shots and heavy blows kept coming at Nate in the third round. The scar tissue had gone worse and cut deepened at the end of third round. Just before the championship rounds started, the ringside doctor came into look at the cut. Diaz nodded he was ready to go, but the doctor disagreed informing the referee to stop the fight.

Diaz tags Masvidal and then Masvidal blows a kiss to the crowd. Unreal! #UFC244 pic.twitter.com/mKp0b5lLJd