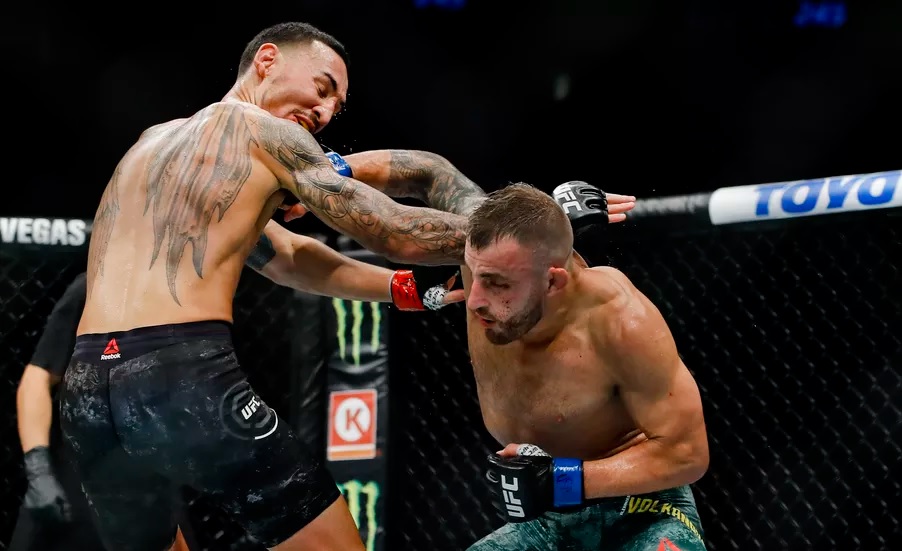 Alexander Volkanovski stood by his promise to take the belt away from Max Holloway and he did it in a dominant fashion.

Alexander followed a smart game plan to slowly chip away Holloway at his own game and use more leg kicks to shake his foundation. The leg kicks began to demobilize Holloway and restrict him from landing any major combinations. While Alexander began to close the distance, he relentlessly pursued the champion with his crisp striking. Volkanovski kept targetting Holloway’s lead leg with both inside and outside leg kicks. Holloway’s leg began to turn red and the champion was in trouble as he was limiting his own striking volume.

The max strikes Holloway could land were only 22 strikes in one of the rounds. Alexander on the other end changed his attacks and targeted the opposite leg. Holloway’s log and rangy jabs were no where to be affecting Alexander either.

In the championship rounds, Holloway rebounded as he began digging to the body and then landing more punches to the head. But Alexander was still standing in front of him ready to knock off those leg kicks. In the fifth round, those leg kicks accumulated to more than 65 and had their affect on Holloway. A unanimous decision win shows how strong Alexander’s game is as he dethroned the long time reigning champion.

The cardio of @AlexVolkanovski on full display here!

Throwing wild in the pocket!

Holloway and Volkanovski go the full 25 for the gold! How are you scoring it?! 📝 #UFC245 pic.twitter.com/pAC6GJLdzi