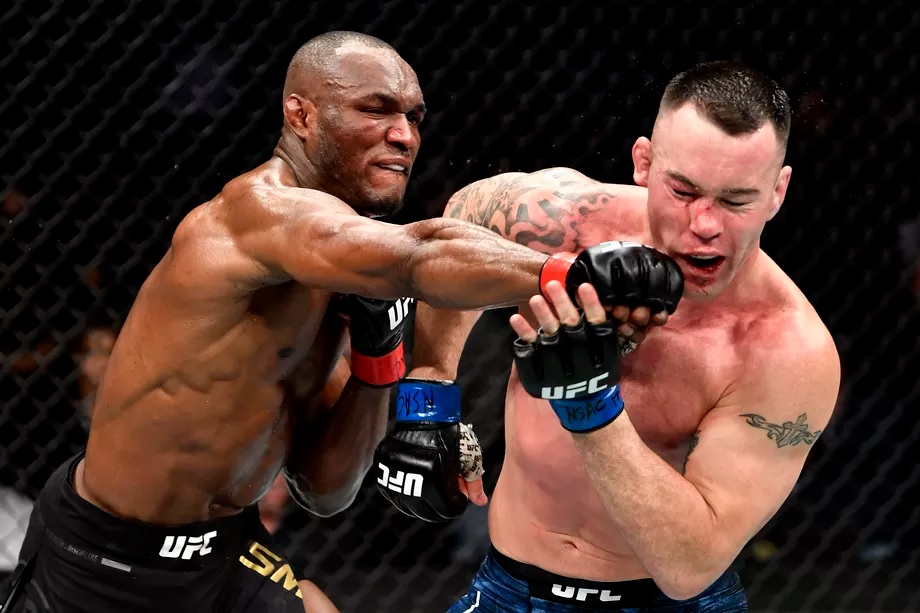 The main event fight between rivals Kamaru Usman and Colby Covington was an all out war between the two welterweights. Both the fighters stood and banged for the entire 24 minutes of the fight until Usman dropped Colby in the final moments to end the fight via TKO.

There were literally zero takedowns attempted. Usman knew Colby’s ground game was elite and decided to trade blows with him. But Colby’s fast pace and lightning hand strikes got the better of him in the first two rounds. Colby landed 80 significant strikes in the first ten minutes giving Usman a hard time. But the champion rebounded and came back stronger in the third round as he rocked Colby with heavy blows to his face.

Usman relied on his jabs more as the round progressed but the volume of strikes Covington landed, could not match the power strikes from Usman. Colby’s face was battered with cuts on either sides. In the third round Colby’s output dipped as the champion began to overpower him. A solid straight from Usman landed so hard, it broke Colby’s jaw.  Colby informed his corner that he broke his jaw in between rounds. But despite the injury, Colby was still standing t trade blows.

The final round saw both the fighters continue to stand and trade. Colby landed some nasty uppercuts while Usman wasn’t ripping to the body. Usman successfully scored a knockdown in the final minute and continued to drop him again until the referee stopped the bout.

Usman and Covington couldn't wait to get their hands on each other! #UFC245 pic.twitter.com/6YyVKE0RIi

And STILL they swing back and forth!

Usman and Covington with an unbelievable championship pace! 🏆 #UFC245 pic.twitter.com/ucac2XUEP8

Usman and Covington with an instant classic so far! #UFC245 🏆 pic.twitter.com/Y1M3YQWoLa