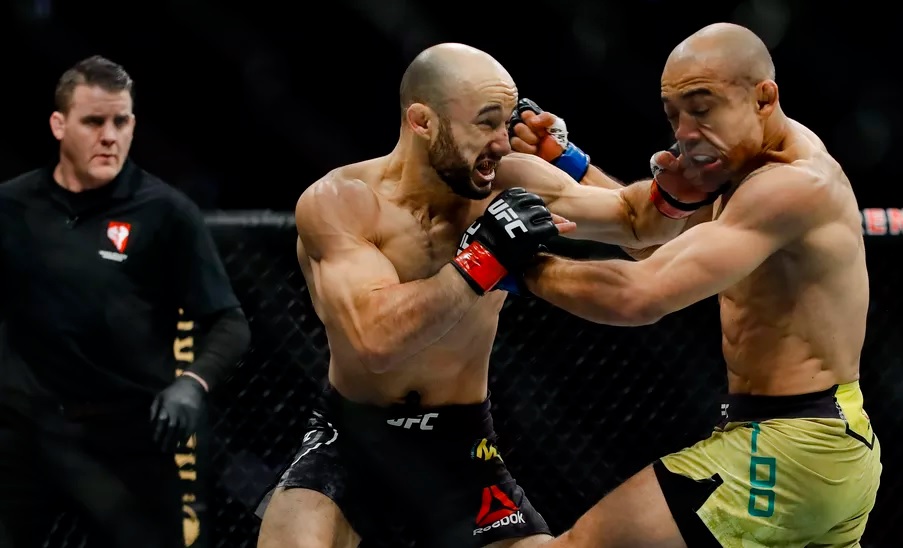 The weight cut for Jose Aldo might have been an easy one, but facing the former title challenger Marlon Moraes was a big test for the former champion. Marlon knew Aldo would come out all guns blazing in his bantamweight debut and would do anything to win it.

Moaes who is known for his fast paced start was no where near his A-Game. He appeared to be slow and hesitant to engage with Aldo. Moraes did manage to stung Aldo with some combinations and a switch kick to the head but the former featherweight champion stood his ground. Aldo turned the momentum of the fight that saw him exchange flurry of strikes and rattled Moraes.

As the round progressed, Moraes began to slow while Aldo looked like the fresher fighter. Aldo’s confidence grew with each strike that he landed on Moraes. Aldo was ahead on the judges scorecard with his strikes and looked like the fight could have gone his way. Even while the scorecard was announced, Moraes was not hoping to get his hand raised but a decision in his favour charged him up.

The King of Rio pouring on the pressure! 👑@JoseAldoJunior #UFC245 pic.twitter.com/I9T0L9RvNX

Close one to call at BW!@MMarlonMoraes and @JoseAldoJunior go the distance – how's your scorecards looking? #UFC245 📝 pic.twitter.com/bRLD3irzTb

Moraes gets a win over a legend at #UFC245 – agree? pic.twitter.com/RWF80vkQpj