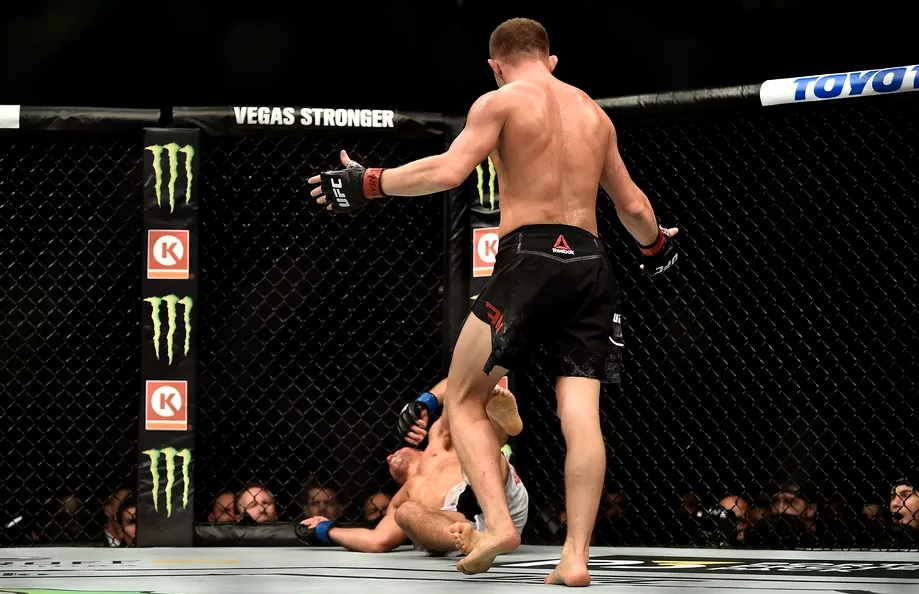 Petr ‘No Mercy’ Yan’s rise in the bantamweight is nothing short of blazing fireball that’s running through the division. The hell on wheels fighter known for his aggressive fighting style and hard hitting shots has drawn attention with yet another highlight reel knockout over the veteran Uriah Faber.

Uriah Faber who made his return earlier this year after three years away from the sport, started off the first round carefully probing the Russian and avoiding any major clash that could spiral down the fight. Yan seemed to be taking it easy and giving much respect to Faber but kept his forward moving and stalking game plan. He carefully picked his shots and whenever found an opening unleashed a series of punches drawing Faber into wild exchanges. Faber landed a well-placed knee strike on Yan but the Russian walked through it unfazed.

In the second round, Yan came back fearlessly as he planted Faber on the canvas with solid right followed by a left straight. Faber dropped but immediately began defending Yan’s strikes. When the fight got back to the feet, Faber landed a stiff left hand catching Yan off guard. The game changing strike came when Yan viciously landed an elbow that dropped Faber down again.

A huge swelling beside Faber’s left eye caused the fight to stop for a brief moment, but he was allowed to continue. At the start of the third round, Yan and Faber ended up in the clinch and just as they broke away Yan threw a left head kick that sent Faber falling on the canvas. The referee quickly stepped into prevent Yan from throwing anymore punishment. With this win, Yan is now on a six fight win streak in the in the UFC and is a serious threat in the bantam weight division.

Good start for No Mercy in R1! 🇷🇺@PetrYanUFC #UFC245 pic.twitter.com/kAvlPtt5s7

Previous article
UFC: What do you think of the UFC 246 McGregor vs Cerrone poster that the UFC just released?
Next article
UFC 245 Results – Marlon Moraes Earns a Questionable Split-Decision Win Over Jose Aldo