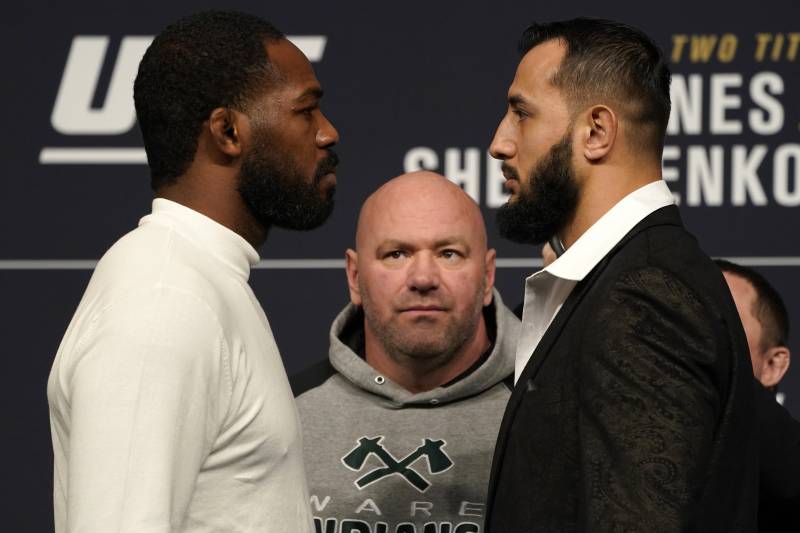 Jon Jones last stepped inside the Octagon back in July at UFC 238 where he defeated Thiago Santos in a close fight.

On the other hand, the 29-year old Dominick Reyes is currently 12-0 inside the Octagon and is coming off of a KO win over former UFC middleweight champion Chris Weidman. He has also defeated the likes of Volkan Oezdemir and Jared Cannonier inside the Octagon.

Jon Jones is the most accomplished mixed martial artist in 205 lb. history. His 19 victories are the most ever by a light
heavyweight. Jones has also earned the most finishes by any light heavyweight in UFC history with ten, tying Chuck Liddell
and Glover Teixeira. Jones’s most recent victory, a split decision victory over Thiago Santos, earned Jones his 13th UFC title
fight victory, tying Georges St-Pierre for the most such victories in UFC history.

Jones has connected with 1,359 significant strikes, which is more than any light 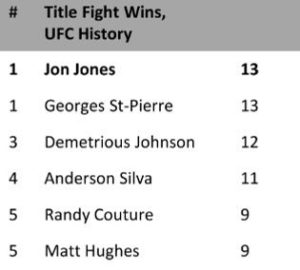 heavyweight. Jones has always been a very efficient striker. He’s connected with
57.6% of his significant strike attempts, the highest accuracy among active light
heavyweights and 2nd highest in 205 lb. history (Maldonado, 60.2%). Leg kicks are
always present in Jones’s arsenal. He’s connected with 337 leg kicks in the UFC, the
most by any light heavyweight and 4th most all-time.

Jones’s has secured five submission victories in the UFC, tied for most in UFC light
heavyweight history. He’s taken down his UFC opponents a total of 40 times, good for
4th most in 205 lb. history.

Dominick Reyes has been perfect since joining the UFC’s light heavyweight division in 2017. His six-fight UFC win streak is the longest 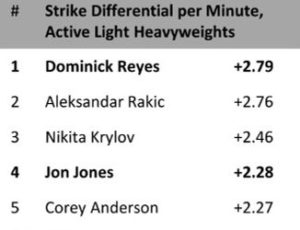 among active light heavyweights. Reyes is coming off yet another finish of an opponent, this time a KO of former
UFC Middleweight Champion Chris Weidman in 1:43. Reyes’s power is ever-present. He averages 1.55 knockdowns per 15
minutes of fighting, the 2nd highest knockdown average among active 205ers (min. 5 fights; Rountree Jr., 1.97). 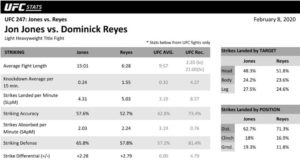 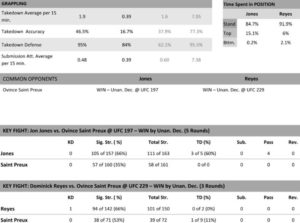 Previous articleUFC News: Jeff Novitzky reveals that Jon Jones was tested a whopping 42 times in 2019 – the most for any athlete ever!
Next articleUFC 247: Valentina Shevchenko vs Katlyn Chookagian: Know your fighters!