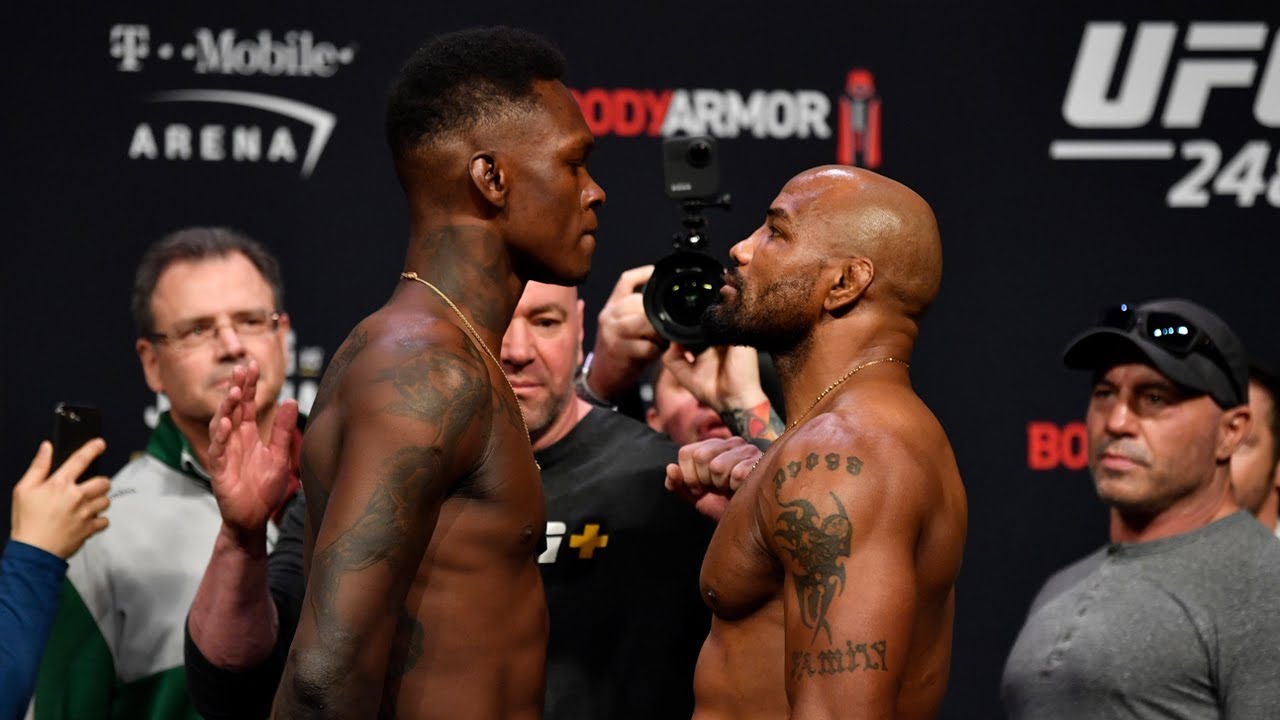 This weekend, UFC travels to the T-Mobile Arena in Las Vegas for UFC 248 and will feature two title bouts in the men’s middleweight and women’s strawweight divisions. After claiming the full ownership of the UFC middleweight division, Israel “The Last Stylebender” Adesanya, will step inside the Octagon to defend his belt and his undefeated stature against Yoel “Soldier of God” Romero in the main event. The co-main event will feature the reigning champion, Zhang Weili, take on former title holder, Joanna Jedrzejczyk. Both fighters have consistently tried to establish their dominance in the strawweight division and this co-main event serves as a perfect opportunity for them to prove their supremacy within the division.

The current middleweight champion, Israel “The Last Stylebender” Adesanya, sports a perfect 18-0 record in MMA, including seven wins in the UFC. Israel Adesanya won the interim title of the middleweight division by beating Kelvin Gastelum in the best fight of 2019 at UFC 236 in April and then became the undisputed champion by knocking out the division’s best, Robert Whittaker, in a dominant performance last October at UFC 243. The Nigerian born New Zealander is a must-watch fighter these days and is the best in the sport when it comes to using his legs and knees. The only concern for Adesanya is that he’s shown little to no ground game, as he’s all about standing up striking and using dynamic range of weapons on his feet. Speaking to the media ahead of defending his title, Adesanya said, “Yoel is a bogeyman. He’s the guy that everyone says they don’t want to fight. Even (middleweight contender) Darren Till, is admitting he’d rather not fight that guy…I don’t understand why? I’ve seen him get rocked. I’ve seen him get stopped. I’ve seen him cry. I’ll make him cry. He’s human like anyone else. And everyone likes to make this myth about how it’s like kicking steel, you hit him he doesn’t fall. I’ll touch him enough times and eventually he’ll crumble too soon. I want to be the first man to stop him properly.”

Many critics think Yoel “Soldier of God” Romero should not be the guy who deserves to stand in the Octagon against Adesanya this weekend but with Paulo Costa side-lined and Robert Whittaker beaten in October, Romero is clearly the most established, most dangerous opponent Adesanya could face in his first title defence. In his next fight, “Soldier of God” was scheduled to fight for the interim belt. He defeated Luke Rockhold in that fight, but had missed weight, making him ineligible to win the title. A rematch with Whittaker was next for the undisputed middleweight crown but Yoel lost the match by split decision at UFC 225 in June 2018. He now comes into the fight with Adesanya off a decision loss to Paulo Costa but with renewed desire and willpower to finally get his hands on the title which has long eluded him in UFC.

Speaking to the media ahead of UFC 248, Yoel says, “I’ve got to finish Israel. I don’t want to go too crazy hard, but I need to finish the fight. Me and my team have the plan to knock him out. When he makes the little one mistake – boom. We have seen him do little mistakes and that’s the key for the fight.”

When confronted on his problems regarding his weight issues, he said, “I’m not thinking about the weight now. Never in my life have I had problems with my weight. I don’t have a problem, but for many years, that’s been the big question. Its been 25 years since I do that weight. The first time I fought in that weight was in 1997. It’s no problem for me, it’s been many years.”

The middleweight title will not be the only title on line at UFC 248. The first championship fight of the night will feature Chinese sensation Weili Zhang defend the crown that Joanna Jedrzejczyk had successfully defended for over two years. Weili Zhang joined UFC in 2018 and after three wins in her first three fights, UFC matched Zhang against the then UFC Strawweight champion Jessica Andrade at UFC Fight Night 157. She delivered a breakthrough performance against Andrade to win the title that night. The victory made her the first Chinese champion in UFC history and transformed how people viewed the 30-year-old fighter. Joanna Jedrzejczyk is also someone who has a lot of experience being at the top of this division. She had won the Strawweight title in her third UFC fight with a second-round knockout win over Carla Esparza at UFC 185 in 2015. Over the next two years, Jedrzejczyk defended the title five times before losing to Rose Namajunas via a surprise first-round knockout. Following her twin losses to Rose Namajunas and a unanimous decision to Shevchenko in the flyweight division, Joanna now gets the opportunity to prove she’s all the way back into the mix by showing up at the highly anticipated showdown with Zhang this weekend.

Zhang is a powerhouse of an athlete to match but with the determination and willpower of Joanna to win back the belt, viewers will get to witness another breath-taking fight this weekend.