‘The Gorilla’ vs. ‘The Killa Gorilla’ won’t happen after all.

UFC 248 is only three weeks away. However #4 ranked middleweight Jared Cannonier is still opponent less. 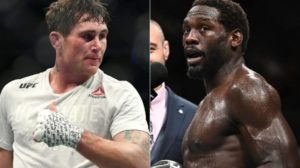 Cannonier was expected to fight former champ Robert Whittaker. However after Whittaker pulled out, the front runner to step in was former welterweight title challenger Darren Till. The bout had a title eliminator written all over it however according to ESPN reporter Brett Okamoto, after many hurdles, the fight won’t happen. (via Twitter):

Based on conversations I’ve had, a potentially sweet middleweight fight between Darren Till and Jared Cannonier is NOT going to happen on March 7 in Las Vegas.

“Based on conversations I’ve had, a potentially sweet middleweight fight between Darren Till and Jared Cannonier is NOT going to happen on March 7 in Las Vegas,” Okamoto tweeted.

Till was associated with a middleweight contest against Jack Hermansson at UFC London a week later. However was immediately picked up to fill in the vacant spot.

It was then reported by UFC President Dana White that Till had suffered a shoulder injury. Till however claimed it was a money issue. Till then took to social media to ask Donald Trump to help him get a visa for the card, which may be the reason halting negotiations.

Till took on former title challenger Kelvin Gastelum at UFC 244 in his divisional debut back in November. Till was able to edge Gastelum via a split decision win.

Cannonier on the other hand has been on a tear. Having fought at heavyweight and light heavyweight, he made his middleweight debut at UFC 230 in 2018. He stepped in on short notice to take on perennial contender and BJJ wizard David Branch. Cannonier pulled out a huge upset in stopping Branch via TKO which paved the way for a top 10 rank.

He then took on one of the greatest of all time in Anderson Silva at UFC 237. Cannonier won the bout via a TKO due to injury caused to Silva due to his leg kick. He then took on #5 ranked Jack Hermansson in September where he won the fight via second round TKO.

Cannonier will probably serve as a backup option if the main event bout between champ Israel Adesanya and Yoel Romero pulls through.