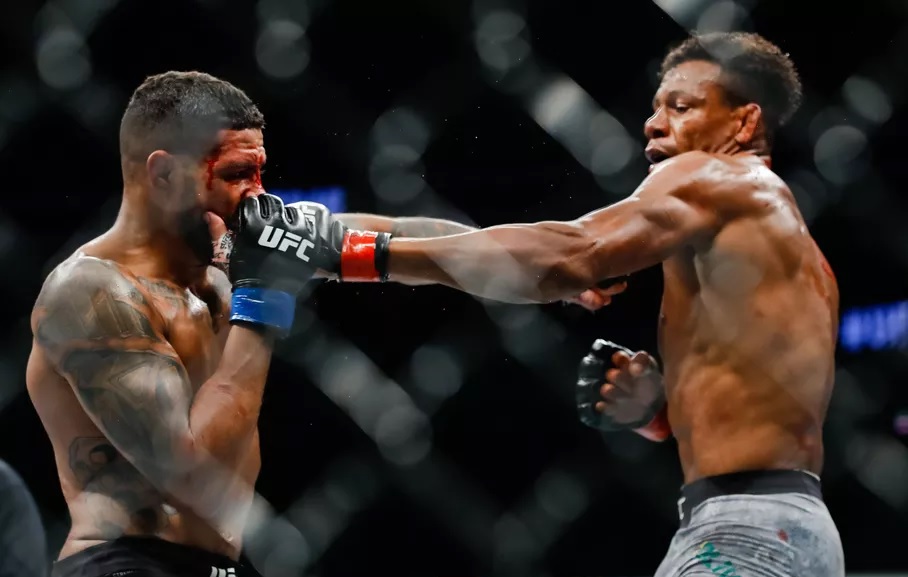 Alex Oliveira’s three fight losing streak has put him on a tough spot. He’s in a desperate need of a win to keep his name intact in the UFC’s roster. His opponent, Max Griffin also looks to rebound after a 1-3 run in the octagon. Opening the main event, this is a major opportunity for Griffin to build his name in the welterweight division. With both their backs to the wall, its a high stake fight neither of these fighters want to loose.

Griffin kick starts the fight by quickly taking the center of the Octagon. Griffin then landed a massive shot in the opening round and put the Brazilian on shaky legs. Rather than capitalizing the opportunity, Griffin transitioned to a take down, but could not inflict any damage on Alex while maintaining ground control. Griffin clearly takes the first round. In the second round. Alex came back strong as he countered a take down attempt and landed a perfectly placed uppercut that sliced open Griffin’s right eye. With blood pouring on his eye and obstructing his vision, Griffin began to have hard time countering Alex who by now had found his range and began landing some heavy strikes. With the fight now surging ahead in the third round, Alex continues to land significant strikes on Griffin who is still struggling with the on pour of blood. In the second half of the final round, Alex took control of the top position and was slowly tiring his opponent out, but the resilient Griffin managed a reversal to get on top till the final seconds of the round. Griffin now completely exhausted, could not make good use of his position.

After three rounds of back and forth bloody war, Alex Oliveira’s striking helped him pull out a split decision win. Oliveira showed off his striking acumen throughout the fight and this crucial win should get his focus back on track.

🇧🇷🤠 Oliveira can hit you from ANYWHERE. #UFC248 pic.twitter.com/y9QMJk6qWI

Back in the saddle! 🤠