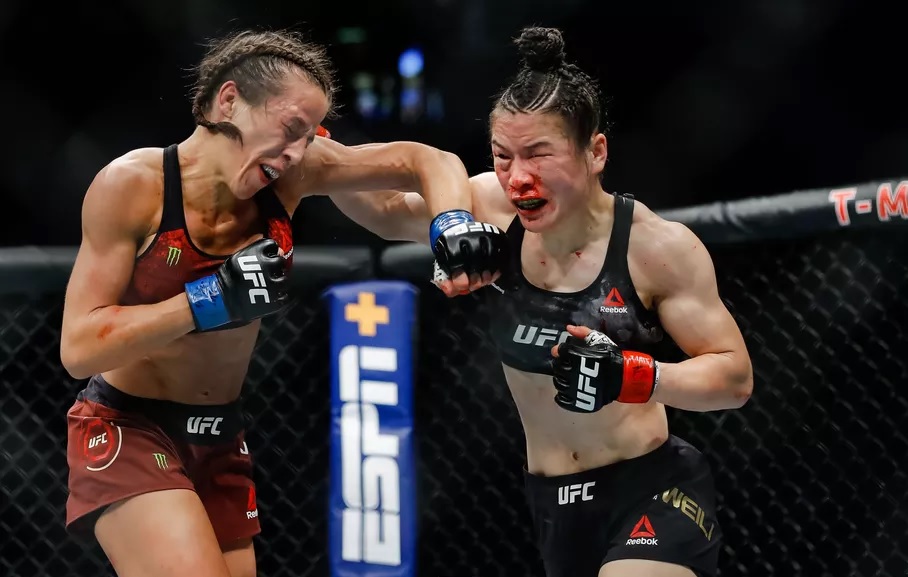 Zhang Weili hasn’t been to fourth round in her entire MMA career, while Joanna has fought the championship rounds seven times in her storied UFC career. For Zhang to retain her title she has to taste the deep waters, against the former strawweight champion.

Both Zhang and Joanna went toe-to-toe and blow-for-blow right off the bat for the entire twenty five minutes as they landed more than 600 combined strikes resulting in a bloody war that could very well be one of the best women’s strawweight title fight ever. Zhang brought in her power striking while Joanna relied on her precisely targeted combinations. With a blazing start Zhang picked up the first two rounds while causing initial damage to Joanna’s forehead which began to blow up. In the third round, Joanna overtook Zhang in the striking department and landed some of the best shots of the fight. Zhang appeared to have slowed down as she struggled to answer Joann’s high volume striking. In the fourth rounds, the wild exchanges escalated with Joanna’s volume slowly taking over the heavy leather from Zhang. It was Joanna’s forehead that began giving her problems. Each time Zhang landed a head strike, Joanna covered up and backed out. Zhang continued to hunt for that knockout as she moved forward landing whatever she could find in her arsenal until the final seconds of the fifth round.

Weili and Joanna putting it all on the line for the right to be called champion! 🏆 #UFC248 pic.twitter.com/uav5jTjn4B