UFC News: UFC 249: Khabib vs. Ferguson will happen…just not in New York!

The most anticipated fight in the history of the sport between champ Khabib Nurmagomedov and Tony Ferguson continues to have its hurdles.

After being cancelled for as much as four times before, the future of the fight looked vague this time around as well. It almost seemed as if the MMA gods ran out of curses for the fight. This time around it was not the injuries but the COVID-19 outbreak which has acted as an obstacle. 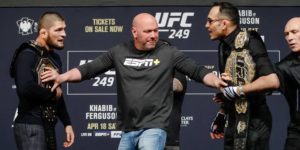 The hopes for the fight took a toll again when UFC announced that they will postpone it’s three upcoming events. However there was some assurance that the UFC 249 mega fight will still happen. Earlier today UFC finally released a statement giving us an update. Good news being the fight in fact will happen, just not in Brooklyn, New York. (via Twitter):

The UFC has released a statement on #UFC249 pic.twitter.com/FUlUg3MSdS

“UFC is planning on moving forward with UFC 249: Khabib vs. Ferguson in April. The event will not take place at Barclay Center in Brooklyn as previously announced,” the statement began (h/t TSN’s Aaron Bronsteter). “The decision was made in accordance with restrictions by New York State limiting large public gatherings. Additional details, including location and venue, will be announced when confirmed.

“Barclays Center ticket holders may seek a full refund at the point of purchase. Internet and phone orders will be automatically cancelled and refunded,” it continued. “UFC looks forward to returning to Brooklyn at the earliest opportunity.”