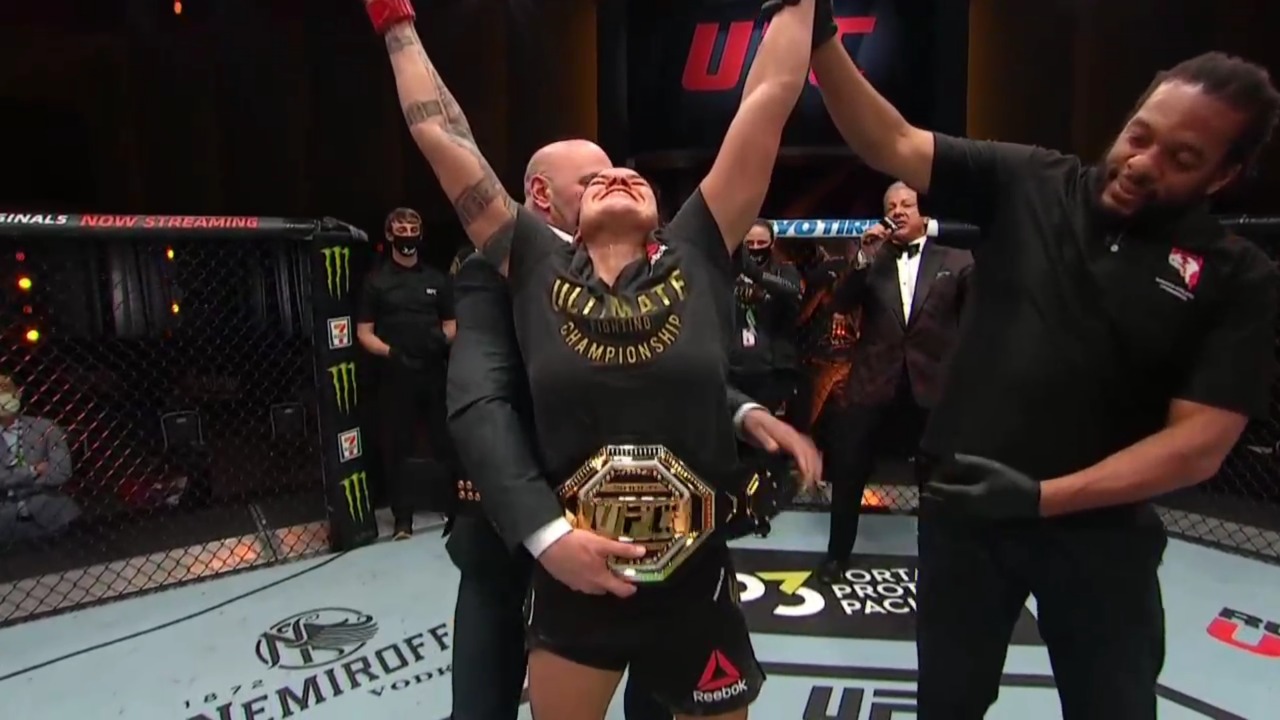 UFC is back with a bang for the month of June. The promotion is hosting it’s first PPV card (UFC 250) in Vegas in nearly three-months featuring a featherweight title fight between Felicia Spencer and Amanda Nunes. 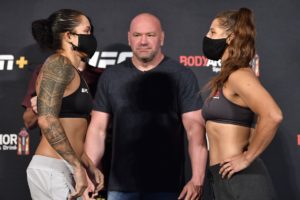 The co-main event features a fight between Raphael Assuncao and Cody Garbrandt to see who deserves a shot at the vacant bantamweight title. The card will also feature two key bouts for the title race in the men’s bantamweight and the welterweight division respectively.

“The Burns brothers came to make a lot of noise in 2020 and we’ve come to make history. Gilbert proved that last week when he took out the No. 1 contender Tyron Woodley with a special performance and today I took out a seasoned veteran in Evan Dunham, so we came here to make history and we are on the way to do that.

“I felt very good, it was a good fight against a tough veteran, a former top lightweight. I knew I had to go in there and put pressure. My style, I try to finish fights, that’s why I’m ‘Blaze’, got to be done in blazing style, so that’s what I did. Having that name on my resume is great because he is super tough, I saw him in a lot of wars and to finish a guy like that in the first round is a statement win.” Burns said.

“It means a lot, I’ve fought a lot of guys. I feel like he’s been the toughest guy I’ve fought so far. It’s kind of a bittersweet feeling, I’ve known this guy for a long time, I met him about 2010, my second amateur fight when he was the No. 1 guy in the world at the time. It’s kind of like a full circle, I came back and I fought him.

“He’s one of the guys I didn’t want to fight just because we are friends, but business is business, I’ve got to make money and it is what it is. The number next to my name doesn’t matter, I’ve got to fight everyone. The only number matters is number one, that’s the champion, other than that I couldn’t care less about the number I got, I’m ready to fight, I’ll be here for the next two weeks just in case someone gets hurt.” Perez said.

“I feel really good, I feel like myself. Cutting to 170, even when I rehydrated back up and you get the 24 hour period to rehydrate and come back up, it still felt like something was missing. 185, perfect cut, I feel like an animal at this weight, the cards played out correct and I feel phenomenal at 185. It was awesome to come back to the Apex and do it here and get my first win. I have no name in mind, anyone, anytime, your boy is ready.” Pitolo said after his win.

“It means everything to me, fighting is my life, fighting and family is absolutely everything in my life, there’s not room for anything else, so you’re talking about the two biggest things in my life. I’ve been cracking at the seams this whole time, I’ve been fighting tears all day, the second that fight was over, I just couldn’t hold it in anymore.

“Even sitting down between rounds, if I have a second to myself to think about what’s happening, I just start to ball up. I just had to keep my s*** together, I had to be a man and suck it up and do my job to the best of my ability and I’m pretty fortunate that I was able to hold it together.” Cody Stamann said.

“It’s huge, you drop two in the UFC, I’ve only fought ranked killers since I’ve been in the UFC, so to finally come into my own and get a big finish, especially with all of the changes going on right now, it was a wild camp, it’s been a wild life, so it feels good for all of the hard work to pay off.

“I’m definitely moving to Thailand as soon as the borders open back up, splitting camps is something that I’m interested in, I had a great vibe this whole camp. Training at elevation is hard on my body, but it always give you that extra will power in the fight.

“I’m going to discuss with my manager, but I definitely want to start climbing the rankings again. I’m rank 13, if Uriah Hall doesn’t have an opponent in the near future, that’d be an interesting fight for me, or basically anyone ranked.” Ian Heinisch said.

“He felt strong there and I knew he wasn’t getting tired there, but I knew every time he had to stand up and face me again with the hands, he was gassing out. Every time I touched him to the body, he felt it. I dropped him in the first round, so I knew that he had to respect my power after that. I just want to let everyone know that I’m here to stay, I’ve been here for a very long time and I got a long ways to go.” Alex said.

ROUND 1: Both fighters feeling each other in the opening round. O’Malley lands a right hand but it doesn’t faze him and returns a counter right of his own. Spinning back kick followed by right-hand lands for O’Malley.

O’Malley lands a right hand and knocks him out.

“It was a matter of minutes from the beginning of the fight before I cracked him with something. I was longer than him and when you’re as fast and accurate as I am, I’m gonna land first and I’m going to land early and I landed on the button.

“I was really, really healthy for this fight, I had no injuries. Last fight, I felt I was 95 percent, I had a couple small injuries, but I felt 100 percent in there tonight.” Sean O’Malley said.

ROUND 1: Neil starts the round with a southpaw stance and he is cutting the cage well. Rocco pushes Magny towards the cage with a body lock and as Magny escapes, Rocco fires some straight jabs.

Rocco manages to get a body lock back up on Magny and is experimenting with his leg locks, but it doesn’t bear any fruits so far. A couple of inside leg kicks lands for Magny and now Rocco goes for the body lock again.

ROUND 2: Magny starts the round firing jabs and leg kicks. Rocco lands a right hand that hurts Rocco momentarily and now successfully executes a body lock takedown. Rocco goes for a Kimura but fails to execute it and now Magny is chasing him down landing the right land.

ROUND 3: Magny ups him tempo and applies pressure on Rocco early on. He lands a knee on Rocco and goes for a takedown. Now Magny is landing multiple punch combinations right now and now Rocco is exhausted as its getting difficult for him to cut the 25 square foot cage. Magny finishing the round strong as he lands some huge shots on Rocco.

“I’m only getting better, that fight shows it. I’m not happy with that performance at all, I know I can do a lot better than that and that fire will just continue to drive me and get back in the gym and work my ass off to get my goals accomplished. I think I’m just starting to scratch the surface on what I can do.” Magny said. 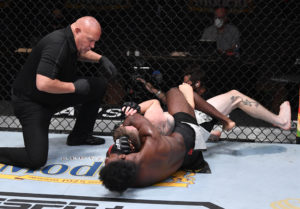 ROUND 1: Aljamain putting the pressure early on and he has Sandhagen under a rear-naked choke stance in the first 30-seconds. SterlinAljag has a tight triangle grip on Sandhagen and now he sinks him under a right RNC grip and chokes him out.

What a terrific performance by Aljamian Sterling as he chokes Cory Sandhagen out in the first round#UFC250 pic.twitter.com/QI1CzQIGT3

“I’m a viper, the human backpack. I put these hooks in and you aren’t going anywhere, you’re going to be there for a very, very long night. I heard his coach say, “he’s just looking to wrestle” and I said, yup haha. That’s my game plan, pressure forward, elite wrestlers can really dictate the pace of a fight, especially if you are competent on the feet, that’s what makes us more dangerous.

“Striking is fun, but it hurts a lot more, I’ll tell you that, wrestling is just an easier, clear-cut path to victory, especially when you are as dangerous on the ground as myself. There are black belts and then there are black belts, and I’m a Serra BJJ black belt,” Sterling said.

ROUND 1: Cody starts the round with a low kick and he is cutting the cage well. Assuncao throws in the jab, but Cody controlling the distance well. Spinning back kick lands for Cody as he attempts to land an overhand right.

Beautiful straight right-hand lands for Cody and he evades a counter with his quick head movement. Assuncao throws a spinning back kick at the end of the round, but Cody evades it by a wide margin.

Cody Garbrandt brutally knocks out Raphael Assuncao right at the end of the second round#UFC250 pic.twitter.com/PmgEHByEq7

Cody lands a big right hand that brutally knocks out Assuncao at the end of the ROUND 2.

ROUND 1: Both fighters feeling each other right now. Spencer goes for a takedown, but Nunes lands a right hand. Lovely combination lands for Nunes and now she follows it up with an uppercut.

Hard right-hand lands for Nunes and now she takes down Spencer and laying on top of her. Nunes lands a couple of elbows on her as she trying to get out of that half guard.

ROUND 2: Spencer attempts to land a superman punch, but Nunes lands a big right hand and pushes her back. Lovely low kick lands for Nunes followed by an overhand right and a straight jab. Spencer wants to take the fight to the ground, but Nunes isn’t blinking and ultimately the Canadian has to stand up. Another dominant round for Nunes.

ROUND 3: Nunes knocks mouthpiece out of Spencer. Nunes follows up with two back to back right hands. She then throws Spencer down with a single leg takedown. But Nunes refuses to take the fight to the ground and Spencer now up on her feet.

Nunes rocking Spencer with back to back leg kicks and now lands a nasty uppercut.  Spencer is hurt by repeated power shots from Nunes.

ROUND 4: A big right-hand snaps Spencer’s head back. It’s the biggest punch landed by Amanda. Spencer is completely outclassed here and the leg kicks aren’t making things easy for her. Spinning back kick landed to Spencer’s body and now the Canadian is in a survival mode.

A multiple punch combination hurts Spencer and now Nunes sinks in an RNC but is saved by the bell.

ROUND 5: Through round 4, Spencer has taken 76 headshots and is getting dominated every second of the fight now.

Felicia Spencer has shown a lot of heart in this fight, but at this point, she is taking unnecessary damage. With 10-seconds remaining on the clock, Nunes scores another takedown.