Khabib Nurmagomedov and Justin Gaethje will fight for the Lightweight title at the ‘fight Island’ in Abu Dhabi, as per Dana White. After having 4 fight cards in a span of 2 weeks, the UFC is finally done with its fights on Yas Island for now and has returned to the United States of America. 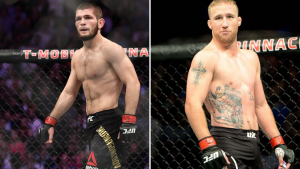 Jorge Masvidal and Kumaru Usman headlined the first card, while Darren Till and Robert Whittaker headlined the last one. Every single card was exciting, and all in all Dana White’s plans worked out successfully. He has said in an interview that Fight Island is not just for the pandemic and that he will be using the Arena to have fights in the future too.

As the severity of the restrictions due to the pandemic loosen, the UFC has moved back to America, and henceforth will be having the fights here at the APEX. Locations for fights until UFC 252, headlined by the Stipe Miocic and Daniel Cormier trilogy, have been finalized and announced. However, the promotion has not yet finalized the locations for any fights after that.

Dana White announced a week back that Khabib Nurmagomedov will be making a comeback, despite the sadful demise of his father and coach. Justin Gaethje will be the challenger, and the two lightweights will be headlining the UFC 254 card on October 24th. In a recent press conference, when asked about the location for UFC 254, Dana White hinted that it will most probably be on the Fight Island.

Khabib and Khamzat together on Yas Island?

As cases rise in America, along with the political uncertainty, we can’t help but wonder if it is a good time for international fighters to enter the country. With some international travel restrictions still in place, nothing can be said with certainty, and the lockdown can be put again anytime the cases skyrocket. This might be the reason why the UFC is trying to keep the fights on the island. If this happens, we can expect to see a lot of international fighters flying to Abu Dhabi.

This opens up the possibility for MMA fans to see Khabib Nurmagomedov and Khamzat Chimaev on the same card, or at least on the same island. While Khabib is on the top trying to defend his belt, Khamzat on the bottom will be trying to get to the top, and it will be interesting to see how that plays out.

UFC News: Jeremy Stephens vs. Edson Barboza in the works for a UFC event in October

Previous articleUFC News: Jeremy Stephens vs. Edson Barboza in the works for a UFC event in October
Next articleDana White warns Dan Hardy over verbal spat with Herb Dean