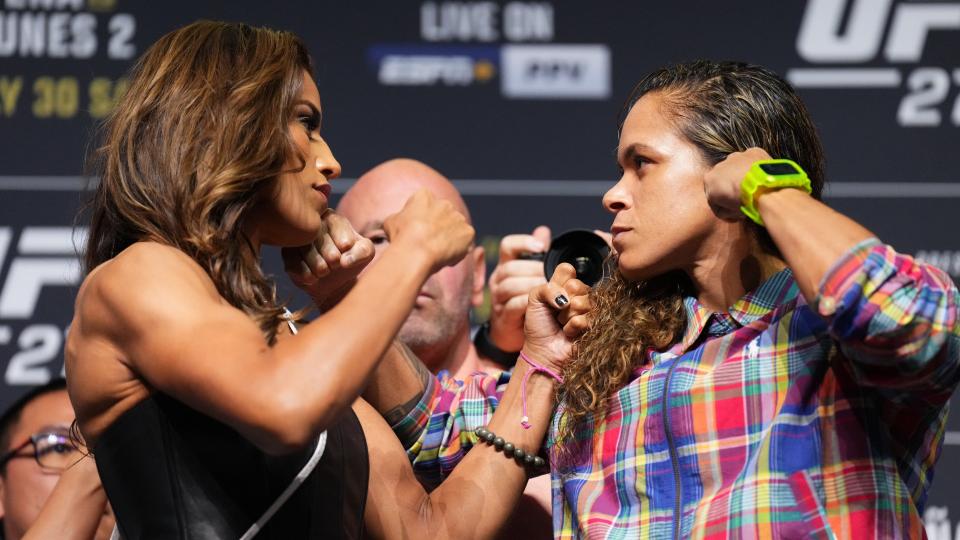 UFC 277 is set to witness Julianna Pena defend her UFC Women’s Bantamweight Championship against Amanda Nunes in the main event of the show from American Airlines Center in Dallas. Meanwhile, in the co-main event of UFC 277, Brandon Moreno has his sights set on the gold as the former flyweight champion battles Kai Kara-France for the interim belt.

Julianna Pena is set to make her first 135-pound title defense against former bantamweight champion Amanda Nunes in the main event of UFC 277. It is a rematch that has been booked after “The Venezuelan Vixen” managed to stun the world. She had picked her second-round submission win over “Lioness.” Now Pena will be eyeing to prove that her first victory was not a fluke.

Pena had shocked the MMA world at UFC 269, submitting Nunes to capture the championship. Prior to the defeat, Nunes had established herself as the greatest female fighter in the history of the sport, winning both the bantamweight and featherweight titles and running through every woman to ever hold either of those championships. Despite coming into the fight with a 2-2 record in her previous four bouts, Pena was able to end Nunes’ run.

In the UFC 277 co-main event, Brandon Moreno is eyeing to recapture gold when the former flyweight champion will battle Kai Kara-France for the interim belt. The pair previously met in 2019 with Moreno taking a decision victory. Kara-France has gone on a 4-1 run, including a current three-fight winning streak, since that fight.

Elsewhere on the card, Texas native and heavyweight record holder Derrick Lewis is set to face the promising talent, Sergei Pavlovich. Lewis is rarely in a boring fight as his last five bouts have all ended via KO or TKO. Pavlovich, meanwhile, has won three in a row since dropping a TKO to Alistair Overeem in his promotional debut. The 13-fight card is loaded with some thrilling fights.

Prediction: Magomed wins or the fight goes over 1.5 rounds @1.33

Previous articleCurtis Blaydes Calls Out Jon Jones Following “Tiny” Comment: If They Hit Me Up For Jon… I’ll Take That Fight!
Next articleMaycee Barber Says She’s Unimpressed by Miesha Tate’s Flyweight Debut But “Wouldn’t Mind” Fighting Her In Future