On Saturday, the UFC makes its way back to Brazil for UFC 283. The vacant light heavyweight championship will be up for grabs in the main battle between hometown favourite Glover Teixeira and Jamahal Hill.

Jiri Prochazka, who won the championship after defeating Teixeira, had to forfeit it because of an injury. Magomed Ankalaev and Jan Blachowicz squared off to choose a new champion at UFC 282, but the contest finished in a draw, prompting UFC president Dana White to declare that Hill and Teixeira would go on to compete for the still-open title. 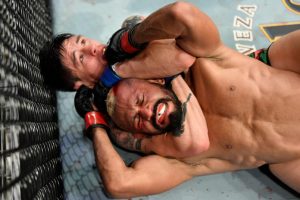 One of the UFC’s most famous rivalries will resume in the co-main event. In their fourth encounter, flyweight champion Deiveson Figueiredo will face interim champion Brandon Moreno. Following a draw in the initial encounter, Moreno prevailed in the rematch with a commanding performance that included a third-round submission. In their third encounter, Figueiredo emerged victorious by a slim margin. After losing to Figueiredo, Moreno won the interim title by defeating Kai Kara-France.

Prediction: Gilbert Burns wins the fight or the fight goes over 1.5 rounds @1.42

Prediction: Jessica Andrade wins or the fight goes over 1.5 rounds @1.40