UFC: Alex Oliveira discussed as a replacement for Santiago Ponzinibbio against Kamaru Usman 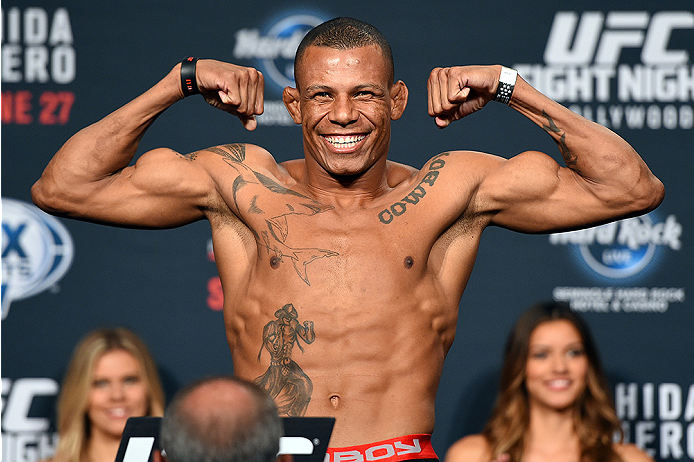 UFC welterweight division fan awaiting the month of May as a lot of exciting fights were coming their way. One of them was a Fight Night 129 headliner between #7 ranked Kamaru ‘the Nigerian Nightmare’  Usman and #10 Santiago ‘Gente Boa’ Ponzinibbio.

This will be the first time that the promotion will visit Chile. The South-American fans were happy to see one of their own south american in Santiago Ponzinibbio to perform an extend his six fight winning streak. However, an unfortunate turn of events took place as the card lost both it’s main event and co-main event. Ponzinibbio pulled out of the fight due to an injury. The co-main event between former UFC light heavyweight champion Mauricio ‘Shogun’ Rua and former tile challenger Volkan Ozdemir was also scrapped as Ozdemir was pulled from the event due to alleged visa issues restricting his travel to Chile. The fight was however rescheduled for Fight Night 134 in Hamburg.

One option discussed for Usman was Cowboy Oliveira, who won last week versus Carlos Condit, but I was told there’s resistance to the offer due to the quick turnaround. Not many available top 15 options at the moment.

Oliveira already has the experience of cashing in the opportunity on short notice. At UFC on Fox 29 in Glendale Arizona, Oliveira took the fight on short notice to replace UFC veteran Matt Brown against former interim UFC welterweight champion Carlos Condit. Surprisingly Oliveira was not concerned about the opponent but about making weight, which he did it with ease being a former lightweight. Oliveira put up a stellar performance defeating Carlos Condit via second round submission.

However, this way around there is some resistance as it would be a quick turn around for Oliveira. But he is one of those few ranked welterweights who isn’t booked and Usman said he’ll only fight a ranked welterweight. (via Twitter):

Just spoke to @USMAN84kg, who said, “They’re working on (finding a replacement). But I won’t fight if it’s not a ranked opponent.”

UFC: Kamaru Usman has a backstage altercation with Colby Covington