UFC: Alistair Overeem vs Curtis Blaydes reportedly in works for UFC 225 in Chicago 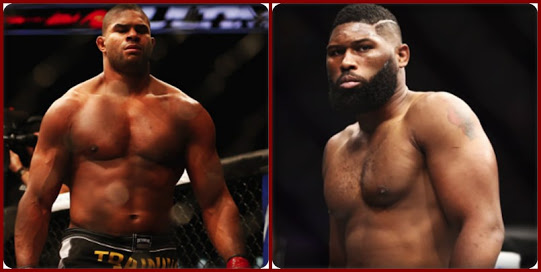 26 year old Curtis Blaydes is fresh off a win against Former Heavyweight Interim Title Challenger and Former K-1 Heavyweight Grand Prix winner Mark Hunt at UFC 221 in Perth,Australia.Blaydes got hurt badly in the first round and was also dropped but a punch from Hunt,but Blaydes showed tremendous courage and recovered to use his wrestling pedigree.Blaydes landed a personal best 10 takedowns in the fight,defeating Hunt via unanimous decision(30-26,30-26,29-27).This was the first time Blaydes was fighting a Top 10 opponent and beating him solidified him a fight against a Top 5 opponent. When asked about whom he would like to fight next,Blaydes just expressed desire for fighting in his hometown.(via YouTube):

Overeem is a former Strike force Heavyweight Champion,Dream Interim Heavyweight Champion, K-1 World Grand Prix winner.Overeem however is coming off a loss against title challenger Francis ‘The Predator’ Ngannou at UFC 218 in what would be called a virtual title eliminator.Ngannou knocked out Alistair Overeem by a brutal punch which further Overeem described as an uppercut from hell at 1:42 of the first round.

Overeem was on a two fight winning streak defeating Mark Hunt and Former Heavyweight Champion Fabricio Werdum after losing his chance at the title against Champion Stipe Miocic.A win against Ngannou would have certainly given him a second title shot.

Blaydes however had just one set back in his career against Francis Ngannou. After the second round,Blaydes was having difficulties with his eye and hence Ngannou was declared the win via Doctor’s stoppage.

With 2018 being this interesting year of superfights,Heavyweight Champion Stipe Miocic is booked against UFC Light Heavyweight Champion Daniel Cormier for the Heavyweight.However, the winner of the battle between Overeem and Blaydes would probably be one win away from getting a title shot.UFC 225 card also has a battle of. former Champions in Claudia Gadelha vs Carla Esparza and also a Flyweight bout between Sergio Pettis and Joseph Benavidez.