“I’m done, I want to be done,” Pennington told her corner after the fourth round when her nose was badly damaged.

Pennington (9-6) was so demoralized in the bout that she actually told her corner she was finished before the start of the fifth round. Her corner talked her into going back out, but it was all for naught. Nunes took her down and landed hammerfists until the bout was stopped. 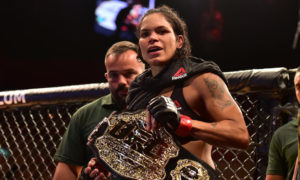 Nunes has now won seven in a row and has recorded 11 career knockout victories. Her UFC title run includes victories over high-profile fighters such as Miesha Tate, Ronda Rousey and Valentina Shevchenko. The UFC has expressed interest in a potential super fight between Nunes and 145-pound champion Cris “Cyborg” Justino later this year.

UFC: Holly Holm opens up about losing four out of her five fights heading into UFC 225 bout against Megan Anderson

Previous articleUFC: Jacare Souza reveals that he had a bad weight cut ahead of UFC 224
Next articleUFC: Tyron Woodley and Amanda Nunes criticize Raquel Pennington’s coaches for not stopping the fight after the fourth round