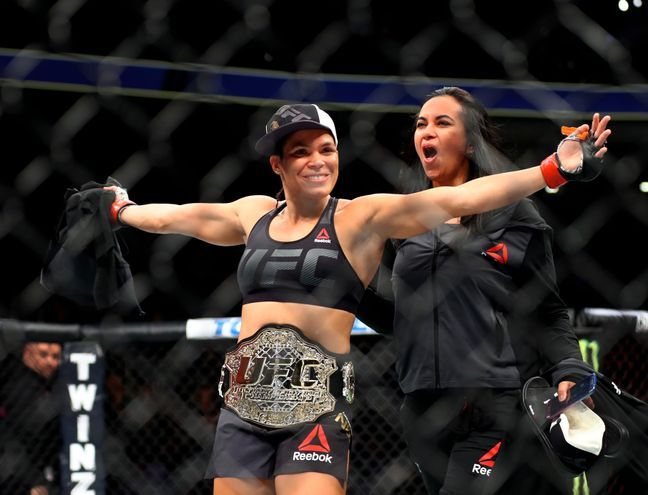 UFC Women’s Bantamweight champion Amanda Nunes is set to defend her title against Raquel Pennington at UFC 224 on May 12. The fight was confirmed amidst rumors about a potential champion vs. champion showdown between Nunes and UFC Women’s Featherweight champion Cris Cyborg.

While a portion of the fans was disappointed with how UFC went forward with the Pennington vs. Nunes fight, Amanda Nunes feels that defending her championship was the right move for her and the division.

“Of course, I’m focused on Raquel right now, but like I said, before, I made this very clear, when I text Dana White I wanted this fight, it was because there was no one else in my division. I didn’t even know if I was going to fight soon, you know. I didn’t want to stay waiting and waiting for years because I’ve been in that position before where there is so long before a fight,” Nunes said during her appearance on UFC Unfiltered (h/t MMA Nytt)

Nunes also claimed that she sees Ketlen Vieira as a future contender in the division just like the case with Pennington.

“We have Rocky and we have Ketlen Vieira and I feel like my division is starting to grow. If you give attention to the division it could be awesome and now I have two, Rocky and Ketlen. I think Rocky is my next opponent and I want to see Ketlen after.” She added.

The Brazilian then detailed about her potential fight with Cris Cyborg. She believes that she has no problem in facing another Brazilian which in this case is Cyborg.

“It has to make sense for both of us to do this so we can do this. It’s nothing personal against Cyborg. I know she’s Brazilian and she like said because we’re Brazilian we aren’t supposed to fight and things like that, but when you become a professional fighter, to become the best, you want to be beat the best. It’s nothing personal against her and I feel like a lot of things are involved in that. I want to keep fighting, I don’t want to wait to fight,” Nunes concluded.

The 29-year-old Nunes holds a professional record of 15-4 and is on a six-fight winning streak.

Previous article
UFC/BOXING: Floyd Mayweather and Conor McGregor will have a boxing rematch claims Owen Roddy
Next article
UFC: Raquel Pennington is open to fight Cris Cyborg in the future