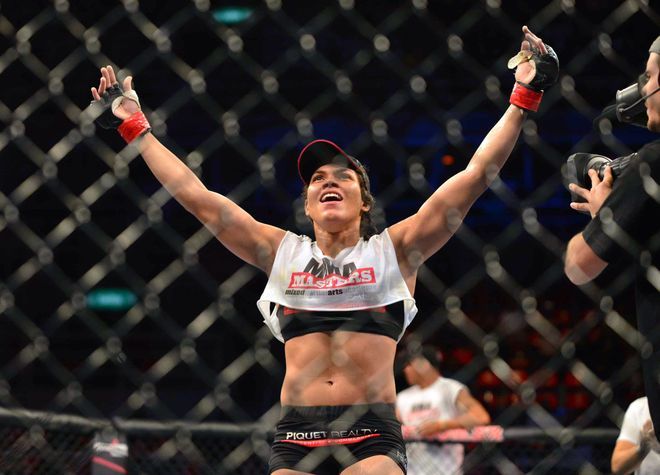 UFC Women’s Bantamweight champion Amanda Nunes is still open to fighting Cris Cyborg. The potential super fight has been making headlines for quite some time but nothing has been confirmed as both Nunes and Cyborg were booked for other fights.

Cyborg will be defending her UFC Women’s Featherweight championship at UFC 222 against Yana Kunitskaya. Despite this title defense, the Brazilian recently mentioned that she still wants to fight Nunes later this year.

And now, Nunes has also expressed a similar desire. In an interview with MMA Junkie, she mentioned about the same.

“We can still negotiate for the future. We’ll see. I’m pretty excited.” She told.

While Cyborg will be defending her title at UFC 222, Nunes is set to face Raquel Pennington at UFC 224 in an attempt to record a third successful title defense.

I wanted some time

Later in the interview, Nunes also spoke about the reason why the fight with Cyborg did not happen earlier.

“She wanted to (return) fast, and I wanted some time. At least put on more muscle and be 100 percent ready for 145 (pounds). And she decided to fight somebody else. I wanted it. It was supposed to be my next (fight). It’s not the way we wanted (it to happen). I would love to fight her, and after this fight we can see,” she said.

Nunes (15-4) started her career at Featherweight and then later dropped to Bantamweight division back in 2011. She has been a force to reckon with ever since and won the Bantamweight title from Miesha Tate back in 2016. Nunes then defended it twice with the first defense coming against Ronda Rousey when the second was against Valentina Shevchenko.

If the fight is indeed happening, expect it to materialize in the summer. Cyborg has also proposed a similar idea on Twitter and mentioned that she would be open to facing Nunes at UFC 226.