UFC: Arjan Bhullar hyped for his octagon return and wishes a successful October for team AKA 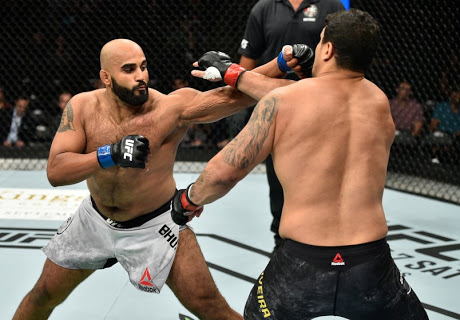 Arjan Bhullar, the Indian origin Canadian, amateur wrestler turned mixed martial artist created a piece of history when he became the first man of an Indian origin to ever compete in the UFC. Then he later created another piece of history when he became the first fighter to ever wear a turban to the octagon at UFC on Fox 29. After suffering the first loss of his MMA and UFC career, he is now all set to get back to winning ways and will face off against Marcelo Golm at UFC Fight Night 138. In a recent tweet he seemed hyped for his return and also wished for a successful October for team American Kickboxing Academy and the UFC lightweight champion, Khabib Nurmaogmedov in particular.

In his last fight Bhullar created another piece of history that he would certainly want to forget, i.e. Bhullar became only the second fighter in the history of the UFC to get submitted via an Omoplata. The Indo-Canadian fighter would surely want to forget his defeat and would want to learn from it and move on. He is still relatively a young heavyweight and will only get better. 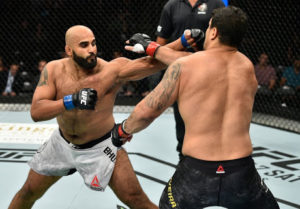 Bhullar, has a profeesional MMA record 7-1 and a UFC record of 1-1 with a huge victory over well-known heavyweight veteran, Luis Henrique. Apart from his single defeat, Bhullar has been extremely dominant in his MMA career and even in his last fight, he was easily winning the fight on the judges’ scorecards before unfortunately getting a bit complacent which led his opponent securing a sneaky Omoplata.

The former Commonwealth Games freestyle wrestling gold-medallist, Bhullar is again looking in great shape and extremely hyped to make a strong comeback.  He trains at arguably the best MMA gym, i.e. A.K.A and recently posted a picture with the UFC lightweight champion wishing him a successful return (for Nurmagomedov’s title defense against former champion Conor McGregor at UFC 229) and for his other A.K.A teammates as well.

Another great week of training among the best at AKA. October will be a great month!

Previous articleUFC 228 Results – Tyron Woodley Retains the Belt, Hands Darren Till His First Loss
Next articleUFC: Paige VanZant reveals that she shares a toothbrush with Mr.VanZant!