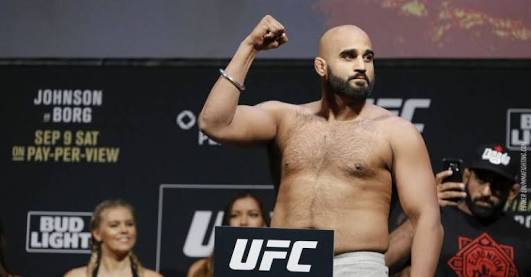 UFC 229 will feature undoubtedly the biggest fight in the history of the sport as UFC superstar, former featherweight and lightweight champion ‘The Notorious’ Conor McGregor (21-3 MMA, 9-1 UFC) will make his much anticipated return to take on UFC lightweight champion Khabib ‘The Eagle’ Nurmagomedov (26-0 MMA, 10-0 UFC).

With the fight being a classic striker vs. grappler matchup, the MMA community are curious to see whether McGregor lands his infamous left hand first or Nurmagomedov registers a takedown.

However, one fighter certainly has his side set. The first fighter of Indian origin, fellow heavyweight, Arjan Singh Bhullar.

Bhullar, who shares training ground with Nurmagomedov at the American Kickboxing Academy has Nurmagomedov winning and used an Indian term to describe him. (via Twitter):

@TeamKhabib with the desi jaan💪🏽 and the win https://t.co/dhACXyDcuM

Bhullar before transitioning into MMA, was a wrestler who also represented Canada in Olympics and Commonwealth Games. Even though being raised in Canada, wrestling was ingrained in him due to his Sikh roots. Bhullar thus used the term ‘desi jaan’ to describe Nurmagomedov’s base of wrestling.

Obviously there is a significant amount of difference between the traditional wrestling where men battle it out in ‘Akhara’ and Nurmagomedov’s style of wrestling called as ‘Combat Sambo’ which is practised in Dagestan and all Russia. However, the principles remain the same, ragdoll your opponent and maul him till he breaks down. And that continues to be the blueprint for both Nurmagomedov and Bhullar in their UFC fights as well.

Previous articleUFC: Henry Cejudo losses his UFC belt in Russia!
Next articleUFC: Kid Yamamoto passes away at the age of 41 after losing battle with cancer