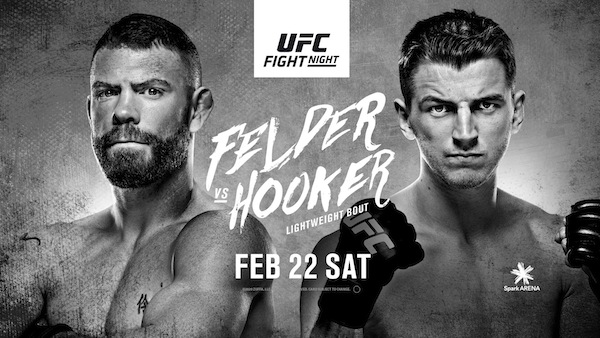 * highest gate and attendance for any sporting event at Spark Arena

Fight of the Night:

Performances of the Night:

Please note that b-roll is to be used for editorial use only and not on social media platforms.

I’ll defend this land, no matter what the cost. Thank you.

It was an honour (to fight Paul Felder). He’s a tough son of a gun. I enjoyed myself.

He’s too dangerous to stand in front of, so I took him down. I said I’d take him down and take his arm.

I’m coming to win fights and make smart decisions. I approach this sport like I’m going on a hunt. I’m not just winging it anymore. I have a job and game plan, so I stick to that. I’ve never been this emotional walking out to a fight. It hit me hard. After my last fight, I didn’t want to let anyone down. I didn’t want to let myself down, because I know how much I put into this.

I want one more fight, then I want a rematch with Misha Cirkunov. I need to earn it first. I don’t care who I fight before him.

I’m super proud of the victory and happy with my performance. I’m happy I made everyone proud.

I’ll fight anybody ranked above me. I want to return in three or four months.

It has been almost a year since my last fight. My family and friends are always behind me. I never stopped training. I feel good and can’t wait to fight again.

The fight went quicker than I planned, but I controlled all the punching exchanges. I’m happy with the result.

This is my division. I’ll go home and talk with my team about the next fight. I want to fight as soon as I can.

I come here for war and to perform—I did both. I was just loving the moment and had a smile on my face. That was a proper fight, with a bit of everything.

He’s a good and strong grappler. I won, but I think a have a few more tests ahead of me, like maybe a really good Jiu-Jitsu guy. It was cool. I’m happy with the performance. It went exactly how I wanted. I won convincingly. Not happy it was a split decision, but whatever.

Alexander Hernandez hasn’t been talking about me, but he just talks trash in general. He doesn’t shut up. He’s disrespectful to a lot of the fighters. You don’t have to be disrespectful. They’re doing the same thing as you and trying to achieve the same goals.

I’m very happy because I went four years without a win. I’m back now. I want to tell the whole 145-pound division to be careful. I’m back and ready for more knockouts. Just not Zabit. Everyone other than Zabit.

I want to fight against a top 15 opponent next.

I’ve felt like I’ve always had the skills and I relied on those for so long. Now I’m just working a lot harder and smarter. I showcased everything I wanted. I have to be more patient. I’m still young. I was in a rush to get to the UFC for so long and took some stupid fights that put me in tough positions. Now I’m just in a mental space where I can focus on me and get better.

I’ve always tried to be really active, but this last break helped me so much. So I was thinking I’d like to fight in July during International Fight Week. That’d be perfect. We’ll see. I have my daughter’s birthday coming up and my birthday coming up. I don’t want to be cutting weight during those times, but I’ll fight if the opponent makes sense.

The grappling was definitely part of the game plan. My corner was telling me not to brawl, but I love a good scrap. I wanted to make up for my last performance. I would have thrown more, but Dan Kelly told me to stop brawling.

I would have liked to do more striking in the third round. A knockout or submission is always good—and I was looking for him—but I had to stay controlled. If something presented itself, I would have taken it. He’s tough.

What’s next? I’m going to have a beer.

I had a lot of different plans for this fight—but knocking him out in the first or second was one of them. I would have been ready to go all three rounds and win on points. Everything was in our plans.

I will fight anyone next. I just want to keep getting better and to show my skills. That’s why I’m in the UFC.

Ever since I started MMA, this was my dream to fight for the UFC in Spark Arena. I can finally take this off the bucket list. This is the best feeling ever, just to feel the energy off my people. They really made me rise to the occasion. This wasn’t for myself, this was for everyone here. This is for the next generation. When I grew up, there was no blueprint to get here.

I could feel the fans in my heart, soul and spirit. I felt like it was my ancestors pushing me on.

It’s a privilege and an honour to represent New Zealand on the world stage. This means everything to us. This is the takeover in 2020. It will be massive year for us.

“I think the fast turnaround keeps me out of my head. It keeps me focused on what’s next and not the past. I’ve had a lot of ups and downs in my career. Sometimes that weighs heavy on me in the Octagon. Putting that behind me, I feel like I’ve emerged as a new fighter.

I feel like everyone is booked right now, but I’d love to fight Karolina if she wins today. Even if she doesn’t, I’d like that fight. It would be a great matchup. That’s always been a fight I’ve wanted. I’m willing to fight anyone, but Karolina’s at the top of the list because our schedules line up.