UFC: ‘They are back here texting and not even looking at the fight’ – Johny Hendricks on Judges

Former UFC Welterweight Champion Johny Hendricks retired from the sport the past weekend.

The controversial Welterweight revealed some of the reasons for his abrupt decision to leave the game to ESPN’s Ariel Helwani. 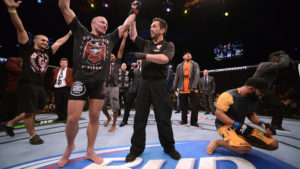 “I’m just a southern kid that likes to do something, That’s really the gist of it.” Hendricks said

“There are some people that are very good at what they do, run their mouth, and I can’t take nothing away from them because that’s the easiest part.”

“So I ask myself, if I wanted to get back to where I was before, could I have done it without running my mouth?” Hendricks said.

Hendricks particularly pinpointed the judges as one of the main reasons for his decision.

“You’re looking at these judges, what do they want?”

“Now that I am retired, I can say whatever I want, and that’s the beauty of it. What are these refs looking for? Why is it not regulated?”

“In Nevada, why do we have boxing judges doing MMA? They don’t understand jiu-jitsu and why are they in the same arena? We have technology nowadays” he added

“If I’m sitting here and I’m fighting somebody, and I hit him hard and the crowd goes ‘oh’ but it really wasn’t that hard of a hit, the judges are going to count that as something better”

Johny Hendricks lost 2 very close decisions in title fights against Georges St. Pierre and Robbie Lawler. Most analysts and fans scored the fights for Hendricks, but the judges didn’t sway.

He explained his first hand experience with the judges.

“I don’t know how many fights I have been to where I’ve sat behind the judge.”

“They are back here texting and not even looking at the fight.”

“Now that I am retired I don’t have to worry about a judge judging my fight the wrong way because he’s pissed off that I called him out.”

Hendricks ended his career on a 2-fight skid, which left a bitter sweet memory of a wonderful career.

However, Hendricks now seems to be enjoying life and the fruits of his labor.

“I still get to wake up, I train once a day, I’m still training wrestling, I’m still working out with guys.”

“The only difference is, I don’t have somebody sitting here saying, ‘Oh, you’re walking around at 208 right now, you’re fat, you need to lose weight.”

UFC reportedly looking at Khabib vs Ferguson for UFC 229, if negotiations with Conor fail

Previous articleUFC reportedly looking at Khabib vs Ferguson for UFC 229, if negotiations with Conor fail
Next articleWanderlei Silva wants to be a politician in Brazil