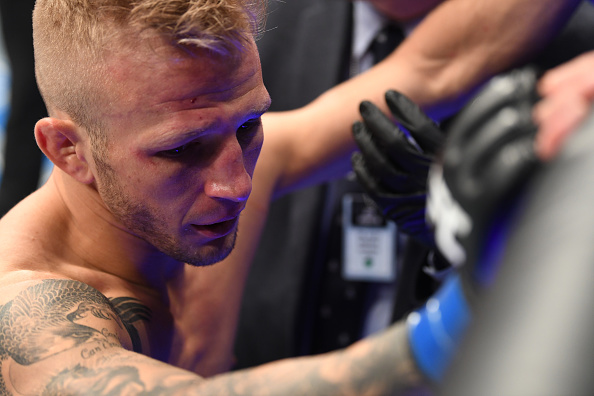 2019 has proved to be one of the worst years in the career of TJ Dillashaw, and we are only three months in. The UFC Bantamweight Champion is Champion no longer as he has relinquished the belt, and has also been banned for one year after failing a drug test.

TJ Dillashaw was heading into 2019 with a lot of confidence. He had won his last three fights and was about to face Henry Cejudo at Flyweight. However, the bout did not pan out how Dillashaw wanted, and he lost his fight against Cejudo in a matter of seconds.

This would not be the last disappointment of the champion in 2019. There were rumours floating around of a rematch between Cejudo and Dillashaw at Bantamweight, for Dillashaw’s title. However, those plans have crumbled and the fighter has been banned following the tests of his latest drug test.

The fighter failed the drug tests from his last fight against Cejudo. New York State Athletic Commission has fined the fighter $10,000 and banned him for 12 months.

“Out of fairness and respect to the rest of my division, I’ve informed the UFC that I’ll be voluntarily relinquishing my title while I deal with this matter.”