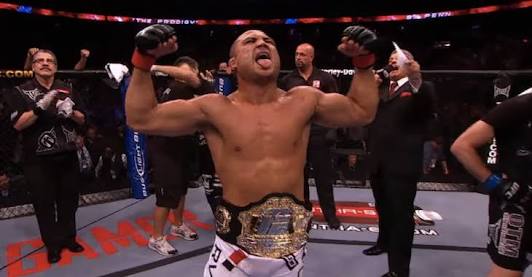 BJ ‘The Prodigy’ Penn(16-12-2) has probably achieved everything a Mixed Martial artist can.Penn is a Former UFC Lightweight Champion,Former UFC Welterweight Champion and a UFC Hall of Famer making him the one amongst 4 fighters to hold the belt in two weight classes.He shares this honour with star studded fighters namely Randy ‘The Natural’ Couture,Conor ‘The Notorious’ McGregor and George ‘Rush’ St-Pierre.

Penn came out of the retirement to make his return against surging Contender Yair ‘Al Pantera’ Rodriguez in a Featherweight Bout.Rodriguez being the taller lankier and a fighter with a Taekwondo Black Belt used a lot of kicks.Penn managed to landed only 4 significant strikes before getting dropped by a front kick by Rodriguez.He then fought UFC veteran Dennis Silver at Fight Night 112 on June,2017.Penn did managed to drop Silver in the second round but still lost to Silver via unanimous decision.

Penn in an interview with MMAnytt said,”I’ve got nothing scheduled.I’m just cruising. I don’t know, I guess I don’t know what to say. The door is always open. The door is always open. I don’t ever want to say never but I don’t have any plans on fighting. But if you’ve got an idea that you think would work well with me, give me a call.”(via YouTube):

Previous articleUFC: Bryan Caraway gets a light-hearted roast on Twitter ahead of his fight in the weekend
Next articleUFC: Sage Northcutt thinking to move back up to the Welterweight Division