Zabit Magomedsharipov was slated to face Yair Rodriguez at UFC 228, but exactly two weeks before the fight, Yair had to pull out of the fight following an injury. But it looks like he may have a new opponent after all.

According to FloCombat, Brandon Davies has agreed to step up on short notice and fight the feared 145 pounder. Featherweight contender Davies took to Twitter to confirm that he will fight Zabit. 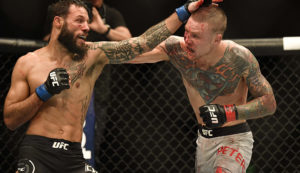 Brandon Davies was offered a UFC contract after he appeared at the first season of Dana White’s Tuesday night contender series with a win over Austin Arnett. Ever since making his debut at UFC, he has failed to make an impact as he has gone 1-2 in the UFC with his lone win coming against Steven Peterson in his second bout inside the Octagon.

Meanwhile, Zabit Magomedsharipov is on a rampage ever since making his debut inside the octagon, he has won three straight fights and has won performance of the night bonus in all three of them. He is coming off of a decision win over Bochniak in April.

UFC 228 is scheduled to take place at the American Airlines Center in Dallas, Texas and will be headlined by Darren Till vs Tyrone Woodley.