Due to the ongoing fight against the corona virus, on site modifications for UFC Fight Night: Lee vs Oliveira in Brasilia, Brazil have taken place. The new start time for the preliminary card will be this Saturday, March 14 at 3pmEDT (Sunday, March 15 at 3am Shanghai) and the main card will air at 6pmEDT (6am Shanghai). 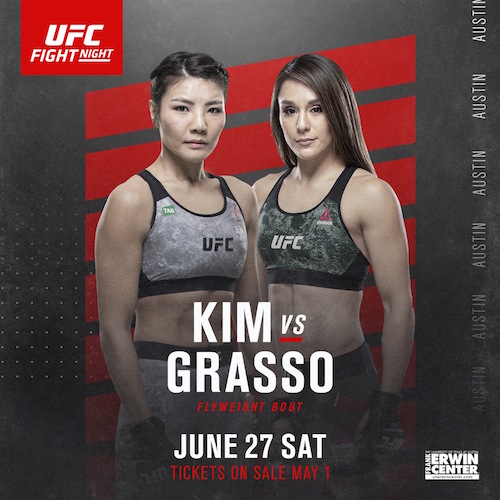 Kim Ji-Yeon vs Alexa Grasso
Korean standout #13 ranked women’s flyweight Kim Ji-Yeon (9-2-2, South Korea) will face #14 ranked Alexa Grasso (11-4, Mexico) in a flyweight bout at UFC Austin on June 27. After a victory over Nadia Kassem in October of 2019, Kim called out Grasso, and now she gets her wish against a fellow ranker. Grasso is coming off a narrow majority decision loss as the co-main event against Carla Esparza in a thrilling bout that earned Fight of the Night.
Please see the attached image for Kim vs Grasso. The main event for UFC Austin will be announced at a later date.
UFC Fight Night: Hermansson vs Weidman
UFC returns to Oklahoma City for the third time on Saturday, May 2 with a thrilling middleweight bout between No. 6 ranked contender Jack Hermansson and former middleweight champion Chris Weidman. In a pivotal strawweight bout, No. 6 ranked contender Claudia Gadelha squares off with undefeated No. 9 Marina Rodriguez in the co-main event.
Also on the now-full card, No. 13 ranked featherweight contender Ryan Hall (8-1, USA) goes for another show-stealing finish when he meets former title challenger Ricardo Lamas (19-8, USA), and The Ultimate Fighter season three veteran Ed Herman (26-14-1 NC, USA) squares off with surging Da-un Jung (13-2, South Korea).
Please see the attached press release for the full card and all relevant details.
***
NEXT:
This weekend, UFC Fight Night: Lee vs Oliveira will be headlined by a lightweight contenders’ bout featuring Kevin Lee and Charles Oliveira. The co-main event will see a clash of Brazilian jiu-jitsu black belts, as Demian Maia takes on Gilbert Burns.