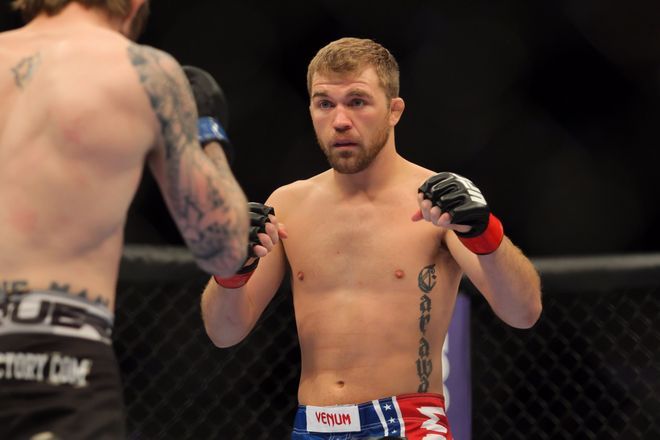 Bryan Caraway will make his Octagon return this weekend at UFC 222 when he fights Cody Stamann. The fight will mark an end to Caraway’s two-year hiatus from the cage which included injuries and flight cancellations.

Currently, on a two-fight winning streak, the fight will have huge implications on the future of Caraway in the UFC and makes it a must-win encounter for him.

Ahead of the crucial fight, things got a bit light-hearted on Twitter for Caraway thanks to the MMA Roasted Twitter which sent out a roast to the Bantamweight star as you can see below.

The 33-year-old saw the funny side of things and ended up retweeting the post as well. MMA Roasted then acknowledged this gesture from Caraway and wished him luck for the fight on Saturday night.

Jon Jones and Miesha Tate are in a feud. I’m with Miesha on this one. Jones put steroids and coke in his body. The only bad thing Miesha put in her body was Bryan Caraway.

Caraway has been going through a tough phase in the past two years. He separated with his long-time girlfriend and former UFC star Miesha Tate during this period and also saw two scheduled fights getting canceled.

With his shoulder injury out of the way, Caraway is eager to fight more frequently and plans to fight thrice this year. He also addressed his relationship with Tate in a recent interview where he mentioned that being in the public eye had put a lot of strain on the relationship.

As mentioned earlier, Caraway will be going up against Cody Stamann at UFC 222 this weekend. It will be Stamann’s third fight in the UFC and the Michigan native is undefeated in his last nine fights. His last defeat came in WXC 52 back in 2014 when he lost to Lawrence DiGiulio via a split decision.The fight will be aired on UFC Fight Pass along with Mike Pyle vs. Zak Ottow and Jordan Johnson vs. Adam Milstead.

Previous article
Super Fight League: Defending champions Sher-E-Punjab knocked out by Haryana Sultans
Next article
“UFC: BJ Penn does not have any plans of fighting but says,”The door is always open”