That is until they decided to part ways in 2017. 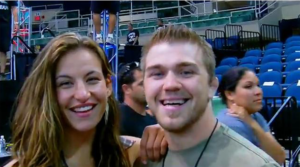 Ever since, Miesha Tate has gone on to have a relationship with The Ultimate Fighter 22 contestant Johnny Nunez and the couple are even expecting a baby girl together, as revealed by Miesha’s new years eve post on Instagram.

However, she did not go into the details of her breakup with longtime former boyfriend Brian Caraway.

Caraway, on the other hand, did open up to Flo Combat in an interview leading up to his comeback fight against Cody Stamann at UFC 222.

If you recall, Caraway had last fought in 2016 against Aljamain Sterling, before taking 2017 off to heal up a torn labrum, bicep muscle and a knee injury.

Now that he’s back in the scheme of things with regards to his fighting career, he also took some time off to address how his relationship with Miesha Tate ultimately came undone.

We both came up from nothing, from the same place, and that was always tough. I think that ended up being kind of our demise, being young and going through all that, not knowing how to handle all of that. It creates a lot of problems and resentment and it stacks up.

You make mistakes when you’re young, and sometimes it’s hard to come back from it. Just being in the public eye really put a strain on our relationship and it put a lot of strain on my personal life.

As you guys can probably see, that’s why I fell off social media. I haven’t posted much in the last year and a half. To me, my peace of mind and well-being and getting ready for the fights was my only focus.

Previous articleMMA Roundup: Who said what? (2/3/2018)
Next articleUFC:Glover Texeira vs Volkan Ozdemir targeted for UFC 224 in Brazil