Former UFC Interim Welterweight champion Carlos Condit is on a 4-fight skid, the longest in his storied career – but he isn’t finished yet, it seems.

Condit has apparently told his management team First Round Management that he intends to fight again later this year, according to ESPN’s Brett Okamoto.

Condit opened up on his future and his career, with a heartbreaking message on Instagram, following his defeat to Alex Oliveira. 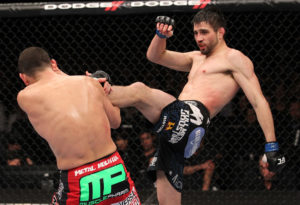 Carlos Condit, one of MMA’s pioneers has been competing professionally since 2002. He hit his recent slump after a very controversial split decision loss to Robbie Lawler in a ‘fight of the year’ title scrap. Condit openly expressed his lack of desire for fighting after the war. Condit temporarily shelved himself for more than a year (2016-17) and returned to make another run at the title – but he has looked a shadow of his former self.

This news comes as a blessing for all ‘Natural Born Killer’ fans. These recent losses could have sparked a fire under his belly and we could yet see the best form of Carlos Condit, one more time.

WWE: The Miz wants to bring back prestige to the WWE Championship

Previous articleUFC: Georges St-Pierre mocks the Nick Diaz with faux confession about foul play prior to their fight, feels that Diaz is paranoid
Next articleUFC: Lyoto Machida sets sights on one last run at the UFC Middleweight Title