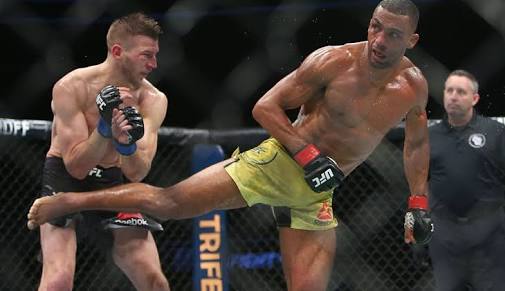 Former UFC middleweight title challenger and current Bellator MMA fighter Chael Sonnen has made quite a transformation from being called the ‘Bad Guy’ to be a voice which addresses important ongoing issues from the MMA community.

Sonnen has never held himself back from giving his opinion be it in interviews, his own podcast or his show with Ariel Helwani. This time he did so speaking about the debatable TKO loss suffered by #14 ranked lightweight Dan Hooker last week at UFC on FOX 31.

Hooker took on UFC veteran Edson Barboza in the co-main of UFC on FOX 31 in Milwaukee, Wisconsin. Barboza tagged Hooker with a massive right hand before eventually switching to what he does the best, kick. Barboza accumulated leg and body kicks on Hooker to a point where Hooker had nothing to offer. However neither did the referee or the corner men of Dan Hooker step in which eventually led to Hooker being folded by a vicious body shot.

A frustrated Sonnen said the corner men should have become the ‘adult in the room’ and stopped the fight by throwing in the towel. Sonnen also suggested that corner men should stop the fight whenever they feel their fighter has nothing to offer. (via Twitter):

I believe a fight should be stopped the second your fighter can no longer win. pic.twitter.com/qClbcfKVER

The above situation has happened quite a lot in MMA. Earlier this year in February, debutant Priscilla Cachoeira took on current flyweight queen Valentina Shevchenko. Shevchenko landed 213 significant strikes compared to Cachoeira’s mere 1 strike before getting submitted in the second. The result certainly was a subject of a controversy. In an another infamous incident at UFC 224 in May, Amanda Nunes took on Raquel Pennington with the bantamweight title on the line. Pennington after the fourth round was completely emptied out as she whispered “I’m done” to her corner. Her corner men however decided to send her in the fifth round only to get knocked out.

Previous articleUFC: Colby Covington brings the heat on Nick Diaz : All he can do is beat up chicks!
Next articleDerek Brunson wants to fight ‘ring card dude’ Elias Theodorou next