The UFC flyweight champion has lately been trying to woo the former WWE Diva’s champion, actress and reality t.v. star, Nikki Bella of The Bella twins lately. Now in a rather interesting turn of events, Cejudo has openly asked Bella out on a date for Valentine’s Day.

It should be noted that their might be some potential romance brewing up between Cejudo and Bella. Cejudo had previously revealed after his recent victory over TJ Dillashaw that he met the Bella Twins before the fight and that he has had a huge crush on Nikki Bella. Bella had later responded to this by posting a video and telling Cejudo that she would love to go out and meet him. 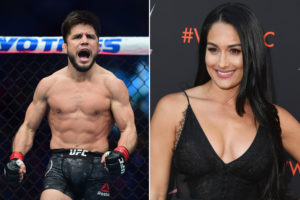 Cejudo, who also had a mini verbal feud with Bella’s brother-in-law the WWE Heavyweight champion Daniel Bryan, took to Twitter yesterday and asked Bella out on a date, while also dissing Bryan in the process. He asked Bella what her plans were for February 14th. Here’s what he tweeted:

Nikki @bellatwins Roses are Red, @wwedanielbryan is turning blue, Becuz I got the Real Championship GOLD, And I have a loaded question 4 u I am trying to rebrand single awareness day , what are your plans on February 14th?

Nikki @bellatwins Roses are Red,@wwedanielbryan is turning blue,
Becuz I got the Real Championship GOLD,
And I have a loaded question 4 u

I am trying to rebrand single awareness day , what are your plans on February 14th?