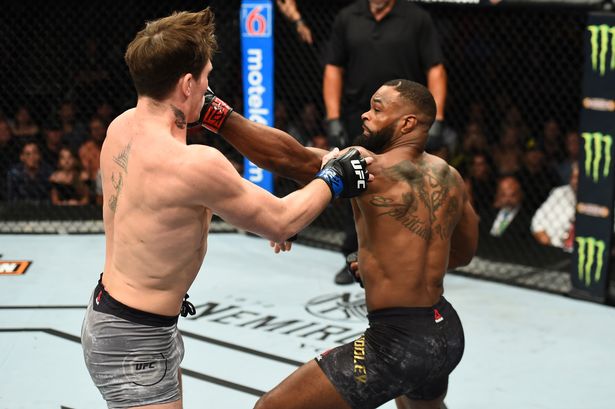 Tyron Woodley beat Darren Till last month at UFC 228. What was thought to be an exciting matchup turned out to be an extremely lopsided second-round submission victory for the champ as Woodley rocked Till on the feet was chocked him on the ground courtesy of a beautiful D’Arce choke to hand Till the first loss of his professional career. This was Woodley’s fourth successful title defense in the UFC. 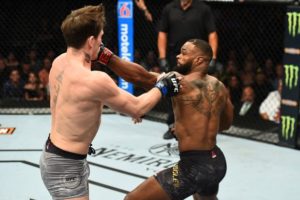 Woodley took part in the latest episode of TMZ Sports’ Hollywood Beatdown from a doctor’s office in Pensacola, Florida. On the episode, he described his hand injury (via MMAMania.com):

“It’s the CMC joint, I dislocated my thumb in the [Darren Till] fight. I did it in the first round and then I actually tore ligaments there. At the end of the first round, I punched and hit the back of his head. And then the second round, I started elbowing and punching and then I got on top and the coach was like ‘Hook punch him!’ So I started doing what we call the hook punch and my hand started hurting. I was like ‘Aw that doesn’t feel good, let me elbow this motherf**ker. So that’s what I started doing. And at the end of the fight, I just saw my thumb just poking out. My natural reaction was to push it back down. I pushed it down, ooh, I’m like ‘I broke it. Wow, this is crazy. I’m probably going to have to get pins, this is probably displaced.’ Then it popped up again, I pushed it back down, it made a noise like light bulbs cracking in my hand.”

Tyron Woodley is expected to fight Colby Covington after he returns to the Octagon following his recovery.