Mixed martial arts in Australia is set to get shot into the mainstream with the news that long-running UFC reality TV series The Ultimate Fighter will be aired on Channel Ten. As part of the deal, Network Ten will also show a pair of UFC events live on consecutive days in December.

Apart from broadcasting the famed reality series, as reported by The Daily Telegraph, the network will also broadcast two live UFC events – TUF Finale from Las Vegas on December 1 as well as UFC Adelaide on December 2. 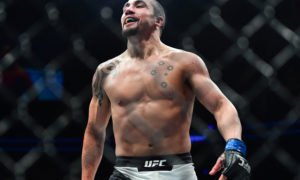 Robert Whittaker was joined on set by rival coach and fellow middleweight American Kelvin Gastelum, who will also now challenge for the Australian’s middleweight title early in 2019. Whittaker is currently recovering from a broken hand suffered in his split decision win over Yoel Romero back in June.

Kevin Gastelum earned his title shot by defeating Ronaldo Souza via round 3 split decision at UFC 224.